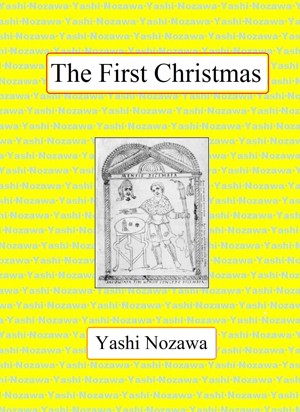 By Yashi Nozawa
It is a non-religious book about history and origin of Christmas celebration. The author tries to determine who, when and where did perform the first Christmas celebration within the confines of the continental USA. During the process, he has to investigate many earlier explorers and settlers including the pre-Columbian period. It also describes the evolution of Christmas celebration in Japan. More
A non-fiction brief history of Christmas and associated interesting problems. The author treated the subject as a simple historical event of his research object, so this book is not a religious book as its title might suggest. The first chapter focuses on discovering the origin of a Christmas celebration as a religious ritual. This simple task was involved finding answers to several important questions, such as when and where Jesus born? When and which church officials decided the date of Christmas? Did they select the correct date? If not, then what date and for what reason did they choose it? Once the first Christmas question is settled in chapter one, the following four chapters deal with the questions of when, where, and who did perform the first Christmas celebration in America. Again the simple inquiry leads us to a tangled web of the incomplete history of many earlier explorers and settlers. It includes the history of European explorers and their mutual conflicts in the period after the discovery of America by Columbus but before the Puritans' landing on Plymouth Rock. This book also describes Leif Erikson's North American settlement and related questions about its exact location. Probably the most intriguing subject is the possibility of pre-Columbian European settlers within the confines of the continental United States. Speculation about the existence of these unconfirmed settlements was triggered by the discovery of several rune-stones, which carried the inscription of rune alphabets, Norsemen's written language. In the last two chapters, the author describes the Japanese Christmas celebration as an example of Christmas in a non-Christian country. Since Japan is the author's native country, he has observed the evolution of Christmas there throughout the past sixty plus years since the end of World War II. It was refreshingly interesting compared to the traditional Japanese activities during the month of December.
Available ebook formats: epub mobi pdf rtf lrf pdb txt html
First 20% Sample: epub mobi (Kindle) lrf more Online Reader
pdb
Price: $2.99 USD
Buy Add to Library Give as a Gift
How gifting works
Create Widget
Tags: christmas vikings runestone first christmas christmas celebration chronography of 354 early explorers jappanese christmas
About Yashi Nozawa

Yashi Nozawa was born in Tokyo, Japan. He came to the United States and received M.S and Sc.D. degrees in Aeronautics and Astronautics from MIT. After his retirement from engineering, he began writing as a second career. He writes in two different fields: the genre of biographical fictions and memoirs, and science and religions, specializing in the rational explanation of religious phenomena. He has written several dozen articles in both fields for periodicals. He has also published, "Temporary Permanence" subtitled, "My Life in America: Humorous Short Stories Based on Experiences of a Japanese Engineer," a collection of biographical short stories. Many readers of the book have praised his O’Henry-style writing and made it a local best seller. "The Spring Connections: Easter, Passover and Others," (as Dr. Yasushi Nozawa) is his second book, the first in the field of science and religion. The book is about the deep-rooted tradition of spring celebration and its interaction with calendar systems. He also disclosed his new interpretation of the meaning of the Israelites' Exodus in the book. "Betrayal, Resurrection, and Conversion: An Atheist's View," is his latest book in science and religion field. He disclosed his bold three hypotheses, which explained major miracles in Christianity with rational and logical ways.

Reviews of The First Christmas by Yashi Nozawa

You have subscribed to alerts for Yashi Nozawa.

You have been added to Yashi Nozawa's favorite list.

You can also sign-up to receive email notifications whenever Yashi Nozawa releases a new book.