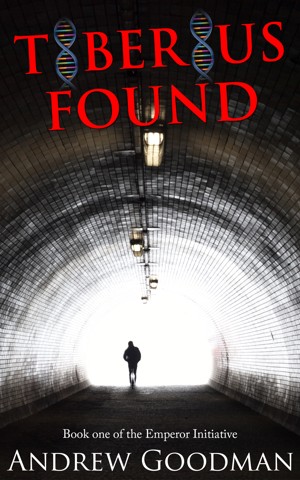 By Andrew Goodman
Daniel Henstock thinks he’s an ordinary schoolboy but discovers he's the world’s first genetically-engineered human - codenamed Tiberius - and the man responsible wants him back to continue his deadly experiments. As his enemies close in Daniel must draw on resources he never knew he had to win his freedom - but in doing so he may be walking into a deadly trap ... More
What would you do if you discovered your whole life to be a lie?

Daniel Henstock thinks he’s an ordinary schoolboy but on his sixteenth birthday his world is turned upside down. He is the world’s first one-hundred-percent genetically-engineered human - assigned the codename Tiberius - and Gregory Dryden, the man responsible, wants him back so that he can continue his deadly experiments.

Running for his life, Daniel flees to New York and is forced to go ‘off-grid’. In this near-future America, where the security-obsessed authorities require citizens to carry DNA cards, Daniel meets the feisty and beautiful Eleanor. But by falling for her, Daniel also puts her in terrible danger.

Daniel pursues the facts about his origins but is hunted by an agent sent by Dryden to bring him to heel. Can Daniel find out the truth whilst trying to evade those who think they own him? As his enemies close in Daniel must draw on resources he never knew he had to win his freedom - but in doing so he may be walking into a deadly trap ...

Andrew is not only a writer of novels but also short stories and short- & feature-length screenplays – he was a semi-finalist in the 2009 British Short Screenplay Competition and was commissioned to write a 90-minute feature in 2012 for SeeView Pictures.

‘Tiberius Crowned’ is the final instalment of his three-part series: The Emperor Initiative, preceded by 'Tiberius Found' and 'Tiberius Bound'.

2014 saw the release of his first “Oliver Drummond” supernatural adventure novels set in the 1920s: ‘Oliver Drummond and the Four Horsemen’, which sees schoolboy Oliver ‘Bulldog’ Drummond pitting his wits against occult groups, ghosts, murderers and traitors who want to gain control over the horseshoes from the Four Horsemen of the Apocalypse.

Also in Series: The Emperor Initiative

You have subscribed to alerts for Andrew Goodman.

You have been added to Andrew Goodman's favorite list.

You can also sign-up to receive email notifications whenever Andrew Goodman releases a new book.