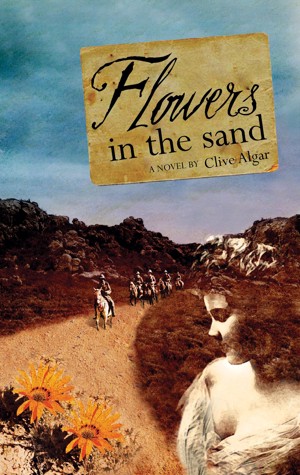 Flowers in the Sand

Flowers in the Sand (2011), the second novel by South African author Clive Algar, has been described by literary critics as "completely engrossing and superbly written" and "a great adventure story".

Writing in Independent Online, critic Lloyd Mackenzie says: "By blending the richness of his own fictional characters with one of South Africa's most historic events, he has created an enticing journey of a woman trying to survive against all odds... it is completely engrossing and superbly written. I am definitely going to look out for more of this author’s work."

Novelist and critic Jeanette Ferreira, writing in Beeld, says: "The Anglo-Boer War (1899-1902) remains a popular source for fiction. And, as with all historical novels, the challenge is to write about people’s destinies without yielding to the temptation to force all that hard-won research material into the text or to write a military report. Clive Algar undoubtedly understands this art.

"Although all his historical figures become people of flesh and blood – especially Jan Smuts – his book is mainly the story of Emma Richardson... who, during the siege of O'okiep, must struggle with moral dilemmas about which she has never even had to think before, let alone handle successfully.

"...Emma is not destined to bloom or wither in this sandveld forever. But if I said where her path leads I would be giving away a thrilling story."

Clive Algar was born in Cape Town in 1942 and has also lived in Johannesburg, Namibia and London. He was a group executive in an international mining company and started writing fiction when he retired and returned to South Africa.

His first novel, Journeys to the End of the World, was published in 2007, and his second, Flowers in the Sand, in 2011. His third novel, Comets, was published as an eBook in 2013. He was invited to contribute a short story to a new Afrikaans anthology of Boer War stories (Boereoorlogstories 2) which was published by Tafelberg in 2012. His story “The Twins” appears in translation.

Clive and his wife Sue divide their time between their mountain home near Wolseley, Western Cape Province, and their lock-up-and-go in Cape Town.

Reviews of Flowers in the Sand by Clive Algar

You have subscribed to alerts for Clive Algar.

You have been added to Clive Algar's favorite list.

You can also sign-up to receive email notifications whenever Clive Algar releases a new book.