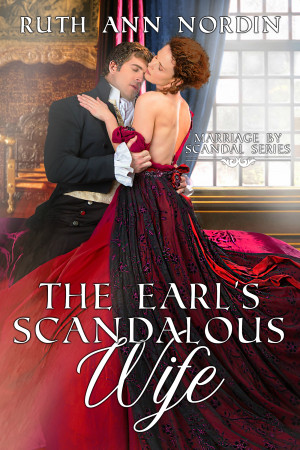 Miss Paula Leighton has to do something before her brother marries her off to a drunk duke who wants nothing more than to use her to get an heir. So when she sees Perry Ambrose, the Lord of Clement, she takes the opportunity to escape, causing a scandal that forces his hand. And the scheme works. She no longer has to marry the duke.

But it’s not over. Thanks to her tainted past, her newfound love with Perry is threatened when her brother comes back into her life. Can she protect Perry from finding out the truth or will her brother get the upper hand?
Available ebook formats: epub mobi lrf pdb
First 20% Sample: epub mobi (Kindle) lrf more
pdb
Price: $3.99 USD
Buy Add to Library Give as a Gift
How gifting works
Create Widget
Tags: romance love regency scandal blackmail greed secret past virgin hero hasty marriage gretna green lord clement perry ambrose
About Ruth Ann Nordin

Reviews of The Earl's Scandalous Wife by Ruth Ann Nordin

I greatly enjoyed this book with the unusual twist of an Earl truly wanting a wife and because he had a limp the marriage market would not consider him. Paula whose brother was about to sell her to the highest bidder. She gets one attempt to find a husband to save her. Perry smart good looking and happy to be the Lord to save her. This is a well written out of the ordinary story. Even though there are prior books these are characters are in this is a stand alone book. I hope you enjoy it as much as I did.

Predictable, but well written. I love RAN's characters, so atypical of how men and women are often portrayed in Romance novels. The dialogue was engaging, the main characters were well thought out and interesting. The twist to this predictable tale is that the lady wasn't overly emotional to the point of doing anything too stupid the way other books make women out to be. She saved herself and that makes for a refreshing read.

The Earl's Scandalous Wife by Ruth Ann Nordin
Marriage by Scandal Series Book 4
Perry Ambrose, the Earl of Clement has had no luck in finding a wife. And he actually wanted one. He was born with one leg a bit shorter and he was sure the use of his cane was an embarrassment. So he couldn't believe his luck when a scandal caused him to marry. And everything about his new wife was so wonderful. The things he knew at least.

Paula Leighton had marred her past a bit with some bad choices. Now her brother was selling her off to an old drunken geezer. No way would she marry that old man. She had one chance to find someone and cause a scandal. She just didn't think she could find someone who was as perfect as the man she chose, a man she didn't feel she deserved.

It's finally Perry's turn for happiness. Through this series we see him as he seriously pursues a wife and deals with his young ward, Christopher Robinson, which was definitely no easy chore. The author brings back all the friends the reader has met in the previous three books; The Earl's Inconvenient Wife, A Most Unsuitable Earl and His Reluctant Lady.
**Sexual content within marriage
http://justjudysjumbles.blogspot.com/2011/09/ruth-ann-nordin.html