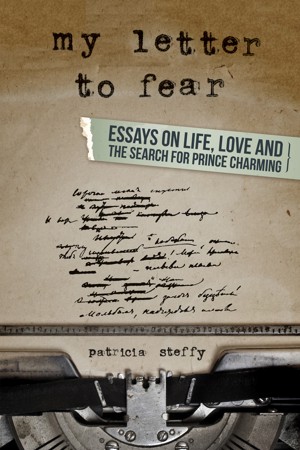 My Letter to Fear (Essays on life, love and the search for Prince Charming)

By Patricia Steffy
From the ridiculous to the heartbreaking, Steffy’s essays explore the differences between the realities of today and the expectations of youth. Her own experiences, plus interviews with women over the course of two years, are the basis for these funny and sometimes challenging pieces. More
From the author about My Letter to Fear (Essays on life, love and the search for Prince Charming):
Over the course of two years, I conducted interviews with the fabulous women around me and their equally fantastic friends. I put no restrictions on age, or ethnicity. They just needed to be willing to answer some questions. I asked them about the expectations they had for their lives when they were very young versus their current realities as adults. I asked them to tell me the best things about themselves (a question which was surprisingly difficult for people to answer) and the worst things. Those answers—the sad, the ridiculous, and the hysterical—and my own experiences became the basis for these essays.
Available ebook formats: epub mobi pdf rtf lrf pdb txt html
First 20% Sample: epub mobi (Kindle) lrf more Online Reader
pdb
Price: $2.99 USD
Buy Add to Library Give as a Gift
How gifting works
Create Widget
Tags: womens issues monologues for women beauty myth humor aging
About Patricia Steffy

Patricia Steffy attended Kenyon College and American University. She is a recent refugee from the corporate world where she worked as an analyst for a law firm for more than 16 years. An escape plan started to develop as she pursued her interests as a writer and producer through Circe’s World Films. She has been involved in co- and exec-producing a number of feature and short films ranging from broad comedy to psychological drama, including the award-winning short "Touch." She is currently developing "Dating in LA and Other Urban Myths" as a web series. When she isn't working on creative writing projects, Steffy works as a freelance travel writer. She has crafted 400+ travel articles for USAToday.com, AZCentral.com, Examiner.com, CruiseVoyant.com, eHow.com and TravelingWithoutANet.com.

You have subscribed to alerts for Patricia Steffy.

You have been added to Patricia Steffy's favorite list.

You can also sign-up to receive email notifications whenever Patricia Steffy releases a new book.