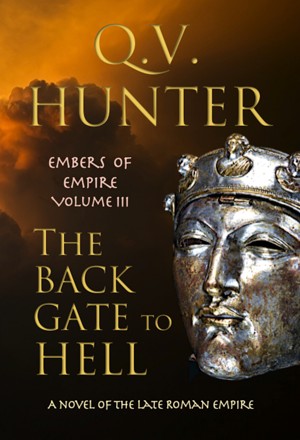 The Back Gate to Hell, a Novel of the Late Roman Empire

Packed with action and intrigue, this new series is a delight for fans of Bernard Cornwell, Steven Saylor, and Robert Harris.

Q. V. Hunter is the author of twelve novels, including six Embers of Empire stories of espionage in the Roman Empire of the mid-fourth century. "The Burning Stakes," the latest exciting tale in The Embers of Empire series will be released in early 2016.

Hunter lives in a Jurassien village which was once a lookout point for Roman soldiers posted to Julius Caesar's colony Noviodunum. They were assigned the resettlement and administration of Celtic Helvetic 'barbarians' defeated in the Battle of Bibracte in 58 BC.

Hunter is married to a descendant of Alemannic refugees of the Roman Empire. They have three adult children, all of whom managed to study Latin and Greek in high school before the Cantonal authorities slashed their Classics budget. Contact the author c/o Eyes and Ears Editorial, eyesandears.editions@gmail.com

About the Series: The Embers of Empire

A unique action adventure espionage series set in the post-Constantine Late Roman Empire. Recruitment into the agentes-in-rebus service takes freedman Marcus Gregorianus Numidianus from his birthplace in Roman North Africa to the wilds of the disputed Northern Rhine border and the eunuch-ridden court of Antiochia in the East. A rare and exciting fictional look at the mid-4th century for fans of Bernard Cornwell, Steven Saylor and Robert Harris. Includes maps, Latin glossaries and rich historical notes on Rome's final decades before irrevocable barbarian incursions marked the embers of a dying Western Empire.

Also in Series: The Embers of Empire

You have subscribed to alerts for Q. V. Hunter.

You have been added to Q. V. Hunter's favorite list.

You can also sign-up to receive email notifications whenever Q. V. Hunter releases a new book.