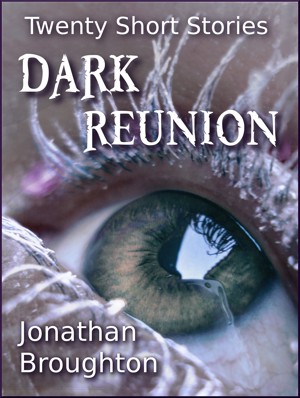 By Jonathan Broughton
Rated 5.00/5 based on 1 reviews
Dark Reunion contains twenty short stories that range from the paranormal to the poignant. Humour, horror, cunning, malice and forgiveness weave their various strands through these original plots. Individuals are faced with a variety of dilemmas, the outcomes of which reveals their true characters. There is compassion and there is revenge: paranoia and reconciliation. More
Dark Reunion is a compilation of all my short stories that first appeared in Roadkill: Four Nasty Stories, Gifts: Four Poignant Stories, Twisted: Four Paranormal Stories, Quirks: Four Humorous Stories and Fey: Four Fantastic Stories. From old ladies wreaking havoc on the high seas in The Penshioner Pirates of Marine Parade, to the problems of bringing up a young dragon in Educating Puff, or the musings of an old man as he sits and knits in Three-Ply Fantasy Special, each story presents a difficult dilemma that the individual has to tackle. Most of them succeed, but not all of them. Sometimes, I mix the paranormal with the everyday, and sometimes there is horror. Often, there is humour.
Available ebook formats: epub mobi pdf lrf pdb txt html
First 50% Sample: epub mobi (Kindle) lrf more Online Reader
pdb
Price: $4.99 USD
Buy Add to Library Give as a Gift
How gifting works
Create Widget
Tags: vampires horror ghosts fantasy paranormal zombies short stories supernatural dark fantasy werewolves urban humour
About Jonathan Broughton

Jonathan writes fantasy, horror, paranormal and urban stories. Any story in any genre in fact, depending on the idea or the plot that pops into his head.
For many years he lived in Hastings on the south coast of England and all of the stories in these books were written when he was by the sea.
Many of Jonathan’s short stories have been published in Rayne Hall’s ‘Ten Tales’ books and April Grey’s ‘Hells...’ series.
He has worked as a Poll Clerk and a Presiding Officer for various local and general elections, an examinations invigilator and as a puppeteer in theatre, films and television. He now lives in the University City of Cambridge, UK
His Facebook page: https://www.facebook.com/jonathan.broughton.5
And his Twitter handle: @jb121jonathan

The stories within Dark Reunion are anything but ordinary. Though some of them are very much relateable most of them feature some sort of paranormal character. These stories are written with British spelling but it is not over the top and is still understandable to American readers.

I do not want to spoil anyone who may be interested in reading this book but a couple of my personal favorite stories were "Furzby Holt" which is about a guy collecting census reports and ends up trying to collect them in a town with some real creepy characters, and "Betrayed" which is about a family who has a secret that they were not aware of. There are also stories on technology gone wrong, vampires, and a dragon. Just do not read these stories before bed time or you might end up having some really interesting dreams!

(reviewed 19 days after purchase)
Heather King reviewed on March 8, 2014
(no rating)
This collection of short stories ranges from dark and scary to paranormal and humorous. Each one tells a quick story about a main character with some very surprising outcomes. While some of the stories come to a final ending, others left me wondering and wanting more. There were so many memorable characters in the cast of short stories.

Without giving away too many of the stories I want to talk about my three favorite short stories in this book. The Penshioner Pirates of Marine Parade seems to take place in a dystopian future. The leader of a town is encouraging the younger members to board a large ship to dispose of their elderly relatives who are nothing but a burden of time and money on both their family and their hometown. When the leader prepares to board the ship he's in for quite a surprise as two of the town's elderly women, dressed up like pirates, attack his ship. What happens next is both funny and thrilling. The ending had my emotions in a jumble as I wanted to stand up cheer but it was bittersweet as well.

The next story that grabbed my attention was Two Blue Doors. A man goes to see his his aunt's whom he has not seen in years. He was here when he was a child and when his mother left this house she was never the same. Years later he is at the house again trying to find out what the aunt's said or what they did to make his mother turn to the bottle. But what he finds is nothing that he expected. His aunt's are not as they seem and a dark secret lies in the dark of their bedroom. However, the man is not who he seems either. The story ends with the man in a confused daze not really knowing what happened. While the reader knows something happened in the house, they aren't sure of exactly what it was. I thought about this one long after I had finished reading.

Finally the story that the book is named after, Dark Reunion. An old man stumbles down the street drunk and unsteady. He falls to the ground and when he looks up he sees the face of the woman he loved thirty-five years ago. He knew she'd be there. Why did she have to push him? She should understand he had to do what he did. But the question is, will he understand why she does what she ends up doing? This story left me with a creepy chill going up my spine.

All of the stories in this collection kept me entertained and wanting to read more. They are short enough that I could pick the book up and read one or two in between tasks. They kept me intrigued and a few of them I couldn't quite stop thinking about because the ending left me wanting more. If you are a fan of the paranormal, unusual, or horror, this collection of short stories is something you need on your shelf!

You have subscribed to alerts for Jonathan Broughton.

You have been added to Jonathan Broughton's favorite list.

You can also sign-up to receive email notifications whenever Jonathan Broughton releases a new book.