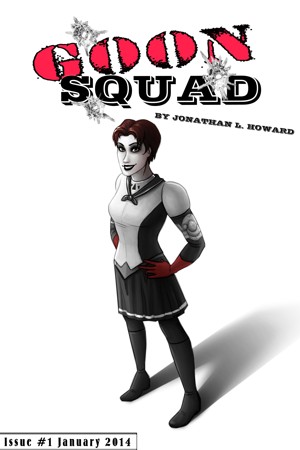 GOON SQUAD Issue #1: "The New Girl." Nadiya Kysla has made mistakes in her past; large-scale, very public mistakes that ended with her losing her liberty. She's not like that now, though. Now she just wants a quiet life. When trouble comes to her, however, it starts a chain of events that mean she will once more adopt a persona she thought she would never again assume -- the infamous Puppet Girl. But can the notorious art terrorist ever leave her past behind to become a hero of today?
Available ebook formats: epub mobi pdf rtf lrf pdb txt html
First 20% Sample: epub mobi (Kindle) lrf more Online Reader
pdb
Price: $0.99 USD
Buy Add to Library Give as a Gift
How gifting works
Create Widget
Tags: adventure action fantasy magic science fiction contemporary superhero superheroes manchester
About Jonathan L. Howard

Jonathan L. Howard is an author, scriptwriter, and game designer. He writes the Johannes Cabal series and the Russalka Chronicles YA SF series, currently comprising of KATYA'S WORLD and KATYA'S WAR. He lives in the UK with his wife and daughter.

"Johannes (Cabal) is one of the most interesting fictional characters of our still-new century." Huffington Post

"Jonathan L. Howard is a supremely talented writer and the Johannes Cabal series makes for superb reading. It would be easy at this point to say that if you like Rankin or Fforde or Pratchett or Holt then you will love these books, but while it may well be true it would be doing Howard a disservice." Sci-Fi-London

"Imagine THE HUNT FOR RED OCTOBER meets RETRIBUTION FALLS. Rich in the character development and packed full of underwater wonders from prow to stern, KATYA'S WORLD is exactly enjoyable as all that." Niall Alexander, Tor.com

About the Series: GOON SQUAD

THE THREAT: There are villainous monsters, mutants, freaks, and warped masterminds in the world, beyond the ability of conventional police forces to deal with.

THE SOLUTION: Recruit your own monsters, mutants, freaks, and warped masterminds, and give them warrant cards.

Join the GOON SQUAD as they bring law and a degree of order to a city under siege from the forces of weirdness.

You have subscribed to alerts for Jonathan L. Howard.

You have been added to Jonathan L. Howard's favorite list.

You can also sign-up to receive email notifications whenever Jonathan L. Howard releases a new book.