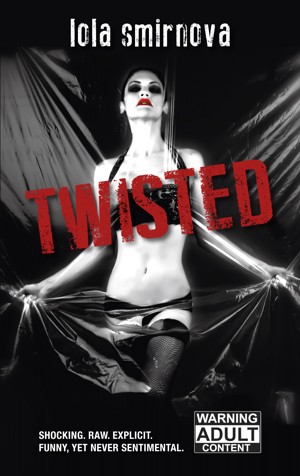 Rated 5.00/5 based on 1 reviews
"Twisted" is a true life shaped into fiction story of vulnerability, courage, and the art of making a living in the sex trade. Shocking, raw, explicit, funny yet never sentimental. A must-read! More
In the corrupt economy of post-Soviet Ukraine opportunities are scarce. Young and eager sisters - Natalia, Lena and Julia - harbour dreams of a better life. Naive and tempted by the allure of 'quick' money, the girls set off on an adventure that changes their lives forever.

Can they stay out of trouble enough to fulfill their ambitions? Can they hold on to their idealism in a world where depravity and danger are constant companions? How far are they willing to go to make a buck?

"Twisted" is a true life shaped into fiction story of vulnerability, courage and the art of making a living in the sex trade.

Lola Smirnova is an award winning author from Ukraine, who loves twisting a suspenseful tale through the dark lens of realism around the sexual underworld, so clocked in secrecy and shame. Lola's work is inspired by real-life events and is meant for the open-minded readers who are not afraid of a little blood, sweat and semen.

Her debut novel Twisted was released in 2014. The book placed as Honorable Mention in General Fiction Category of The 2014 London Book Festival's Annual Competition and took the 3rd Place at The Drunken Druids International Book Award 2014.

Now, living in South Africa, Lola is working on her third book in the trilogy, which proves just how many fascinating stories she has to share about the ordinary women in the global sex industry.

The book is really fantastic!

(reviewed 27 days after purchase)
Irina Malashenko reviewed on April 2, 2014
(no rating)
Although there are a lot of books describing stories about whores & others such a type of girls, this one is very realistic. The book is extremly hot & honest. Yes, sometimes it is hard to admit facts that are narrated there, but at the same time"Twisted" is really exciting! You will never guess what is waiting for you on the next page. It picks you from the first chapter & keeps through all the book. The book is "must read" for all girls who are looking for better life abroad.

You have subscribed to alerts for Lola Smirnova.

You have been added to Lola Smirnova's favorite list.

You can also sign-up to receive email notifications whenever Lola Smirnova releases a new book.