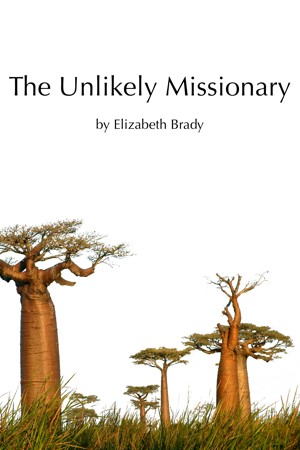 By Elizabeth Brady
Sorority girl finds God and answers call to mission field in Africa. Katherine leaves behind a stunned family and fiancé to enter the dynamic world of expatriates. Bush living is tough, but the real challenge is accepting God's forgiveness...and breaking off her engagement. More
Katherine knew she was called to Africa. She just wished she were as confident about her engagement to John.

Katherine Tierney had sown a "burlap sack of wild oats" in college. But, after making peace with God, she stuns her fiancé and family by answering a call to the mission field in Africa.

Set in 1990, Katherine serves for one year in far away Burkina Faso where she is welcomed into the tight knit community of missionaries. Adjusting to the rigors of bush living is tough, but Katherine's test comes in the quiet of her mud brick house where she is confronted by her past and learns to accept God's forgiveness.

I published “The Unlikely Missionary” as a fiction novel based on my 10 months serving as a short-term missionary in the small bush town of Fada N’Gourma, Burkina Faso, West Africa in 1990-91.

Having grown up in the suburbs of Washington D.C. in the Episcopal Church I was completely unprepared for bush living on a missionary compound. But, like all unexpected journeys, it was life changing.

The story that emerged is fiction in the sense that many characters and dynamics were pulled in from different places and times, and some completely imagined. But, the hilarity and challenge of adjusting to bush living as a suburban American is real.

In light of the sudden death of my son, Mack, on New Year’s Eve 2012, I considered rewriting the book because of the fictional death of a young boy in the story. But, after much thought, I decided to leave it as it was and respect the story I wrote at that time.

I can be contacted at ebrady@unlikelymissionary.com.

Reviews of The Unlikely Missionary by Elizabeth Brady

You have subscribed to alerts for Elizabeth Brady.

You have been added to Elizabeth Brady's favorite list.

You can also sign-up to receive email notifications whenever Elizabeth Brady releases a new book.