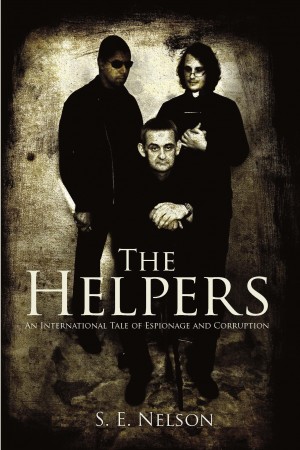 The Helpers: An International Tale of Espionage and Corruption

Monsieur Lance Lemmand, a veteran French Intelligence Officer in DRC, suspects the hand of “The Helpers” in the current political unrest. He enlists his protégé, the brilliant and handsome Pierre-Jean Philippe, to help him investigate. When Kai, a local schoolgirl, who is hiding a deep dark secret, decides to take action, she seeks out Jenny for help. Kai gives Jenny damaging information that could bring down “The Helpers.” When “The Helpers” find out, they go after Jenny with a vengeance. They will stop at nothing to prevent her from exposing them.

Jenny finds herself on the run, caught in a web of intrigue, espionage and assassinations, spanning from Congo to Europe, and as far reaching as the United States. Her only hope is to find Lance and Pierre who are out of reach. Will Jenny survive long enough to achieve her ultimate goal, fulfill her duty to Kai and sort out her feelings for Pierre? Will Lance and Pierre find her before it is too late? Or will “The Helpers” silence them once and for all.
Available ebook formats: epub
Price: $0.99 USD
Buy Add to Library Give as a Gift
How gifting works
Create Widget
Tags: thriller suspense espionage journalism france corruption africa international thriller adventure fiction congo rebellion colonialism democratic republic of congo historical action adventure thriller action and suspense
About S. E. Nelson

Nelson is an award-winning author who writes African action-adventure stories. Topics include: friendship, espionage, imperialism, colonialism, corruption, war and human-trafficking. Nelson's first novel "Nightmare Along the River Nile" is set in Uganda and Sudan. It is about a student who was abducted by the Lord's Resistance Army (LRA) rebels and sold into slavery. The story was inspired by actual events that happened to many young people in Northern Uganda in the 1990s.

Nelson's second novel "The Helpers" is an action-packed international tale of espionage and corruption, which is set in the Democratic Republic of Congo (DRC), Europe and United States. Although the story is fictitious, much of its background was inspired by historical events that happened during colonial times. The sequel to "The Helpers" will be out in 2019.

Nelson has lived and worked in Africa, Europe and United States and is an advocate of human rights, peace, child education and anti-slavery. Nelson can be reached by email through the website.

Reviews of The Helpers: An International Tale of Espionage and Corruption by S. E. Nelson

You have subscribed to Smashwords Alerts new release notifications for S. E. Nelson.

You have been added to S. E. Nelson's favorite list.

You can also sign-up to receive email notifications whenever S. E. Nelson releases a new book.