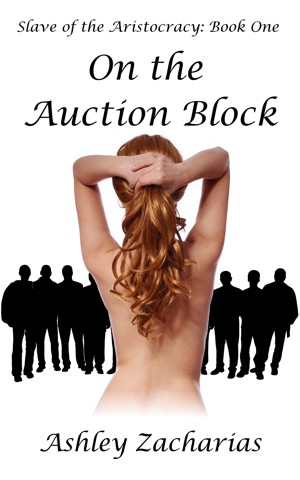 Slave of the Aristocracy: Book One – On the Auction Block

Rated 4.38/5 based on 8 reviews
When Lady Irene saw her husband buy a female pleasure slave at auction, she scandalized the whole aristocracy with her outrageous response. And now there's a book telling every pornographic detail of her adventure. More
Did you hear what happened to Lady Irene? Yes, Lord Fortson's wife. She went to a slave auction with him. That's right, she watched him buy a new slave. Beautiful creature, I heard. Everyone's saying that he paid an outrageous price for it. But a titled lady going to a slave auction was only the beginning of the scandal. When she saw her husband buy that gorgeous slave, Lady Irene went right around the bend. Completely stark, raving mad. And you know what she did? Scandalous! No one ever heard of such a thing. I knew her, you know, and I can't believe she'd do something like that. But everyone says she really did it. And now, I heard that someone wrote a book about it. It's tells all the filthy details for anyone to read. Lady Annabelle told me that it's downright pornographic. I've just got to get a hold of a copy and hear the whole story.
Download: epub mobi (Kindle) pdf more Online Reader
rtf lrf pdb txt
Price: Free! USD
Add to Library
Create Widget
Tags: fantasy orgy bdsm discipline bondage slavery
About Ashley Zacharias

Also in Series: Slave of the Aristocracy

excellent! The plot is very plausible for the story setting. The descriptions convey the image, without causing the story to drag. Looking forward to reading the next 4.

I absolutely loved the book. I am already looking forward to reading the next one in line. Ashley’s storytelling is very good and I appreciate her language.
I have become a fan of hers.

A story of abuse and degradation. It is well written story of an ugly world.

Thoroughly enjoyed reading this book. Hopefully they are as fascinating. Author creates a society for her books that is enthralling. Looking forward to the rest of the series.

A fascinating books series that would actually work quite well even without the adult content (but wouldn't be nearly as much fun or surreal).

The world Zacharias has created for us is the "male dream" in almost every respect. Men of substance (the aristocrats) buy and sell sex slaves at their whim. The slaves are all young, beautiful, skilled, and uninhibited. Men have total control over their slaves, with no responsibilities at all; the main character belongs for a time to a man devoted to torturing his slaves in excruciating fashion, and no one thinks the less of him for it. When slaves become too old to be pleasing as sex slaves, they are discarded (worked to death in short order as "work slaves").

Zacharias makes this world believable, through use of detail and a very-well-thought-out plot that immerses the reader slowly in the various levels of this society over the course of the first four books, and then shows it subject to change in the fifth. As a man, it is rather uncomfortable to see the dark side of the male fantasy. I'm hoping that was a purpose in writing the books.

Not just the story is good, though. The writing, and especially the dialogue, make these books an enjoyable read just for the language. Highly recommended.

This story begins with a premise similar to that in “White Ivory” by Leslie Brooks. In both the protagonist is a respectable woman in a dull, sexless marriage who chooses to become a slave. Both characters get the sex they want; both also pay a price they do not expect. Ms Zacharias' protagonist is a high-born woman in a society resembling those described by Jane Austen: a rigid hierarchy, with strong rules about how women of the upper classes will behave. Lady Irene violates those norms. Her punishment for doing so is worse than she expects.

It puzzles this reader that men in this imagined upper-class society marry at all. Sex is freely available – to men with the money to buy slaves, at least. But not to wives of that station; these women provide some companionship, but seemingly not enough to justify marriage. Children are why upper-class men of Victorian society married: they wanted heirs. But there's no mention of children here. (Austen's women who had been married long were mothers.) Readers might be astonished that only the one wife rebels.

The present volume appears to be the first of a series. It ends with an appropriate cliff-hanging. We look forward to the sequel.