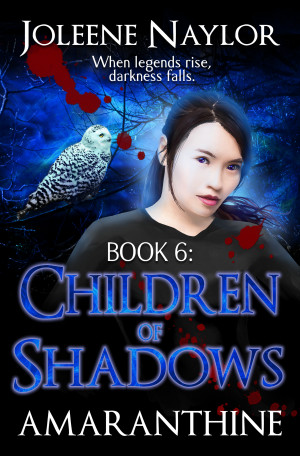 Rated 5.00/5 based on 3 reviews
An extinct cult resurfaces to wage war on the vampire guilds, leaving destruction in their path. Katelina and Jorick are trapped in Munich’s stronghold, with Ume, a vampiress who claims to know Verchiel and offers the help of her secret organization.
But, can they trust Ume and her friends? Why have the Children of Shadows reappeared? Is it really a former ally that leads them, or a look alike? More
The sixth installment of the Amaranthine series pulsates with the dark blood of vampire lore.

The Children of Shadows, a vampire cult not seen for hundreds of years, resurfaces to wage war on the vampire guilds. Led by a familiar face, the cult wreaks havoc while Katelina and Jorick are trapped in Munich’s stronghold. Ume, a mysterious vampiress, who claims to know Verchiel, offers the help of her secret organization. But how are she and Verchiel connected, and can they trust her?

As mysteries are solved, new ones appear. Why have the Children of Shadows returned, and is it really a former ally that leads them, or a look-alike? Jorick and Katelina will have to team up with past companions and new allies if they want to find out the truth.

Legends rise and secrets are revealed in a world where vampires walk, drenched in blood and shadows.

Joleene Naylor is the author of the glitter-less Amaranthine vampire universe, a world where vampires aren't for children. Comprised of a main series, a standalone prequel, and several short story collections, she has plans to continue expanding with a trilogy and several standalone novels.

In her spare time, Joleene is a freelance book cover designer and for-fun photographer. She maintains several blogs, full of odd ramblings, and occasionally updates her website at JoleeneNaylor.com. In what little time is left ,she watches anime, plays PokemonGo, and works on her crooked Victorian house in Villisca, Iowa. Between her husband, family, and pets, she is never lonely, in fact, quite the opposite. Should she disappear, one might look for her on a beach in Tahiti, sipping a tropical drink and wearing a disguise.

Ramblings from the Darkness at www.JoleeneNaylor.com
You never know what you’ll find in the shadows…..

About the Series: Amaranthine

Pulled into a world of darkness, Katelina's fate becomes intertwined with that of Jorick, a dark, enigmatic vampire. To stay by his side, she must navigate intrigue, terror and bloodshed as they are drawn from one battle to another. Dreams of peace seem elusive, and are complicated by mysterious vampires, old relics, and an ancient master. Join Katelina and Jorick in a world where vampires don't sparkle and night is eternal.

Reviews of Children of Shadows by Joleene Naylor

War has come to the Amaranthine world, and Jorick and Katelina are caught up in the middle of it. A group claiming to be Children of Shadows is bombing vampire strongholds, while another secret organization claims to oppose them. After being held against their will in Munich, Jorick and Katelina escape only to find themselves plunged into intrigue and danger. They're swept along from continent to continent, intent on getting to the bottom of who is leading the Children of Shadows. Is Malick the ring-leader, or is the newly awakened Samael the one who resurrected the evil group? And, most importantly, who keeps invading Katelina's thoughts and dreams?

I know I keep saying each book is the best one yet, but that's because each book gets better and better. Children of Shadows is a very strong sixth book in the series, a book that sets up the series for the most exciting plot-line yet. This book centers around Cyprus, Malick, and Samael--three dangerous vampires with their own unique goals. Cyprus is focused on revenge, while Malick craves turmoil and power. Samael's ultimate goals are unknown to Jorick and Katelina, and this makes him the most dangerous adversary of all. While forces within Katelina drives her to greater strength and bravery, she is probably the most vulnerable she's been throughout the series.

One of my favorite aspects of this book was the underlying fear inspired by Samael who is always on the periphery of Katelina's thoughts and fears. There are hints that Katelina isn't quite the same since she consumed the ancient vampire's blood at the end of book five, but even Jorick and Verchiel can't quite figure out the ultimate effects.

In terms of character development, this book has a lot going on. Katelina's relationship with the other characters evolves, particularly with Sadhira, Loren, Oren, Etsuko, and even Torina. Even the more prickly of her vampire companions (Micah) has grudging respect for her, as she's proven herself in more ways than one. There's a great scene with Loren and Micah where Katelina shows her devotion and love for the vampires who have been a part of her life.

Overall, I thoroughly enjoyed this book, just like I've enjoyed the entire series. The author's talent in creating this detailed world and tying multiple characters and plot lines together is astounding. If you're looking for a series to fall in love with, this is it. With six full-length books, several short story collections, and a blog dedicated to the series, being an Amaranthine fan is truly an experience. I can't wait for book seven!

This book was such a fun read that I finished it in only a few days. All my favorite characters were present and got into their typical amounts of trouble under the leadership of Jorick. The beginning set the tone for the whole book when the vampires take a vacation on a beach. From there, the story just got better. By the end, I couldn't wait for the next book to be published.
Joleene Naylor is an exceptional author who creates the most realistic characters and although her books are about vampires, the stories seem real too.

(reviewed the day of purchase)
Amanda Masters reviewed on March 15, 2014

I so loved this book! Joleene Naylor is the best! I so love this series, and I so love these characters! Joleene has no end to how she entertains her audience and her story becomes alive from the first moment you start reading it. The epic battles, the witty comments, the endless twists and turns, not to mention the colourful characters and terrifying villains.

Wanting nothing but relaxation after all they have been through, Katelina and Jorick relax on the beach for awhile before heading for home to tie up loose ends. Of course nothing can ever be that simple for them and as they head home they are set upon by mysterious vampires. who can they be?

A trip back to headquarters reveals a old secret organization called Children of Shadows on the rise, one headed by some familiar faces. Why have they reappeared? and what does it all have to do with what went on in the temple?

Great Book! Joleene Naylor is one of the best authors ever! I so love her writing! she becomes each and every character as she is writing them and you can feel it in her stories. Her characters are so real and even though fictional they have depth and real traits that make them feel as if they were real people.

You have subscribed to alerts for Joleene Naylor.

You have been added to Joleene Naylor's favorite list.

You can also sign-up to receive email notifications whenever Joleene Naylor releases a new book.