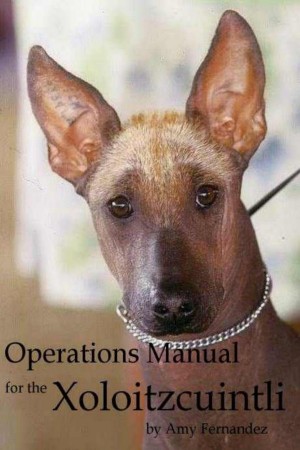 Operations Manual for the Xoloitzcuintli (2012 Edition)

The complete, illustrated, guide to the Xoloitzcuintli, for judges, breeders and owners, featuring color photos and B&W line drawings.

This e-book provides an illustrated, in depth examination of the Xoloitzcuintli breed against the standards that apply in its home country of Mexico, and as used by the American Xolo club.

Xolo owner, breeder, and judge, Amy Fernandez, has many years of experience in this breed, and has judged the Mexican Xoloitzcuintli specialty show in Tijuana.

Amy Fernandez acquired her first Chinese Crested in 1981. In the past 27 years, her Razzmatazz kennel has produced six generations of champions.

She is president of the Xoloitzcuintli Club of America, and has edited the official club newsletter, The Xolo News since 1986. In 2003, she had the honor of judging the Mexican Xolo Specialty in Tijuana.

Amy is a member of the World Dog Press, and past president of the Dog Writers Association of America (DWAA). She is a feature writer for Dog World, the AKC Gazette, Popular Dogs, Dogs in Review, and Top Notch Toys. In 2003 her book Dog Breeding As A Fine Art was the overall winner of the DWAA writing competition. Her writing has also won the Elsworth Howell award, the Robert Cole award, and the PAW Arthur Award.

Her dog paintings have received awards from the Society of Illustrators, The Pastel Society of America, The Art Show at the Dog Show, and can be found in the Dog Museum of America. Samples of her artwork can be viewed online at www.Amyfernandez.net.

You have subscribed to alerts for Amy Fernandez.

You have been added to Amy Fernandez's favorite list.

You can also sign-up to receive email notifications whenever Amy Fernandez releases a new book.