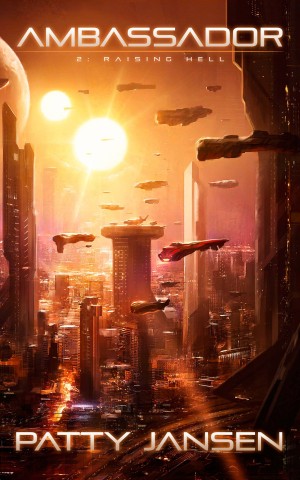 By Patty Jansen
Rated 4.00/5 based on 1 reviews
Cory Wilson goes on a hare-brained mission to save a friend's position, messing with alien cultures and going where no human should go. More
THE SECOND-QUICKEST way to get yourself killed when dealing with Coldi people of the planet Asto is to look a superior in the eye. The Coldi people possess an instinct that demands the formation of hierarchical networks in which every person has a prescribed place. These networks provide stability. They also place one person at the top.
Ezhya Palayi is that person.
After having been released by his previous employers, Cory Wilson not only depends on Ezhya Palayi for his income, but he has developed an unusually friendly relationship with this man whom people on Earth would call an absolute dictator, but whose reign is benign.
The third-quickest way to get yourself killed when dealing with Coldi people is when the leader you depended on for support is suddenly no longer there, as when he goes missing because the system society relies on for interstellar travel goes down.
In a highly-strung hierarchical society, it won’t be long before someone else tries to claim the top spot, someone less benign, someone aggressive who is likely to destabilise peace between Asto and other worlds.
But by far the quickest way to get yourself killed is, as a non-Coldi outsider, to visit Asto and try to interfere in their hierarchical system, to mess with instincts you don’t feel yourself, and people who are much stronger than you.
Oh, and did you know that the average daytime temperature is well over 50 degrees C?

I came across Patty Jansen's Ambassador books when I got the first two, book 1 and book 1A, from Story Bundle. A great way to discover new authors. These two books were enough to lead me to the others in the series.

This book continues where the other finished. Cory Wilson is the ambassador of the title, although he's more of a delegate to an alien organisation. He has a team of aliens around him and it's through his interactions with the alien cultures that we get to know more of this world.

I like the fact that in most cases Cory is way out of his depth and often relies upon his alien team to save him. This isn't some sort of ultimate space marine. He's weaker and slower than his team members, is on a planet that he is definitely not suited to and has stepped into the middle of a culture that he understands enough to get himself into serious trouble. The only thing he does well is talk. :-) But that is not to say the book lacks action. Far from it.

The cultures, worlds and characters are consistent with the previous books. There is character growth visible, a growth that is believable for a human being. There are enough threads to keep the reader guessing what is happening and who is responsible for these situations.

I usually read military SF, so this series is something different for me as it is more of a whodunnit. A good read that kept my interest. I intended to write a review after reading it, but I had to read books 3-6 instead. :-)