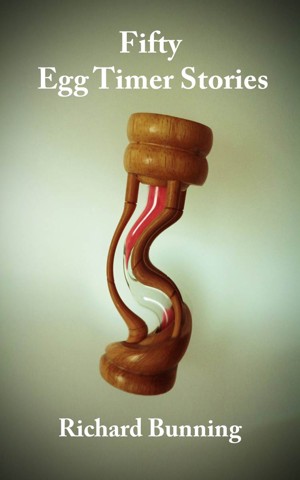 By Richard Bunning
Rated 4.33/5 based on 3 reviews
Fifty Egg Timer Stories is a collection of 50 shot stories of between 600 and 1000 words. The stories are by one author and are of mixed genre. Some of these stories are flippant and/or amusing whilst others touch on serious topics. The common theme, if one can be found at all, is the provision of short bursts of entertainment. I hope that all readers find some stories to their individual liking. More
Fifty Egg Timer Stories is a collection of short stories by one author, all of between 600 and 1000 words. They are written across a mixture of genres without any central theme except being entertaining 'flash fiction'. Actually, the stories cover all the ground between non-fiction and fantasy. This range includes historical fact, far fetched speculative fiction, romance, philosophical reflection and humour. Many of the stories originated from friendly competition amongst other writers of short stories, so these have appeared on-line within social media groups. None of these stories has been 'published' prior to inclusion in this book. All the stories are intended to be complete and totally independent, although some are more rounded than others. No reader is going to be a fan of all these stories, though it is hoped that most appreciate the deliberate attempt at providing a diversity of interest.

I am currently a writer of speculative Science Fiction.
Thank you to all who read my books.
I review other peoples works in many genres, specialising in helping promote self published and small publishers authors. My main reviews site is at http://richardbunningbooksandreviews.weebly.com

What an eclectic mix! I would call many of these delightful little stories philosophical musings by an intelligent and curious-minded author. More appetizers than main dishes, they run the gamut of genres, time periods (past and future) and places (the author is clearly a well-traveled soul). Some I liked more than others and I was bemused by one of the story's assertions that the earth was a former colony of Mars and humans are what remains of that civilization (ancient astronaut theory, perhaps?). I also liked some of the stories based on the author's real experience (in fact, I loved that the genre of each story was helpfully denoted in parentheses, just like this). Now I'd like to read some longer narratives by the author.

Stories I liked:
“Introducing Egg Timer Flash Fiction” – introduction – explains the title of the book: a story takes about 3 minutes to read, just as long as it takes for a hen egg to boil. In a similar manner, the author compares novellas or novels to other types of eggs (ostrich egg or elephant bird egg). Written with a lot of humor, this introductory short story offers a new, funny classification of books.

“Disassociated Consciousness and Hope” – speculative fiction – what would it be like if your brain were still alive after your body died? Here you can read the thoughts that go through a brain floating in a jar of liquid.

“Died of Protected Pride” – real life fiction – a story with a well-delineated main character (for a short story), Alice, a victim of her own racism.

“Hostages, Combinations for Survival” – suspense fiction – a story about the thoughts that go through the character’s mind while he is being kept hostage in a bank; survival instinct and morality fight in this suspense story.

“Beach Parasol and Abandoned Persona” and “Umbrella from Oblia” - real life fiction – In these two stories Richard Bunning touches again the theme of racism, using the same character, an African man, in both: as a main character in the first, and secondary in the latter. Even if the stories have different subjects, and can be read separately, I think they complete each other. The characters are believable and, again, very well delineated. The stories take place in Italy, where, sometimes, when things look pretty on the outside, they may not really be so.

“Pray for Mabinty’s Dream” - real life fiction – a message in a bottle, a letter written by a young African girl, Rebecca, on her way to leave her native village, to embark on journey bigger than life, hoping that she would get to England. Written in a less than perfect English, with elements of native speech – the way the author imagined the girl to write – this realistic story is my favorite.

“Kassa on My Mind” – romance - the main character is a teenager, in love with a classmate, Kassa, going through the torture of his first love, trying to overcome his shyness and to prove to Kassa that he is not like all the other boys.

“What Dino Saw on Lombard Street” – social fiction – the history of a pawnshop, with very detailed descriptions of the things contained within.

“Rose, La Môme, Mon Mome & Mon Repos” – paranormal – Strange forces come from behind the grave, even in short stories; a father who has lost his son has proof of that, when the dead son saves his life.

“Pink’s Reflection” – psychological fiction – quite a scary story, written in first person, from the point of view of a mentally deranged individual who has been locked up for killing his own mother. Dark humor reigns.

As the author says, it would be impossible for all the stories to be one person's cup of tea. I recommend the book to lovers of flash fiction everywhere.

Richard Bunning's 'Fifty Egg Timer Short Stories' is about the best INDIE writing I've had the pleasure of reading in ages. With this collection of Genre Flash Fiction, the author displays a dominance and control of language, grammar, dialects, characters, setting and description rarely seen by bestselling writers; and he does it all in 4 pages or less per story.

Flash Fiction - Definition
Flash fiction is a style of writing which involves producing very short pieces of fictional literature.
Works of flash fiction can comprise as little as a single page or 250 words.

'Fifty Egg Timer Short Stories' is unique in its wide range of genres. Sci-fi and Speculative Fiction are well represented along with Historical Fiction, Contemporary and even Chick Lit.

My only complaint about this collection is that a few of the stories were so compelling that I felt cheated that there wasn't a possibility to explore the topic in greater depth in the Flash Fiction format.

Watch for some cleverly hidden cultural references and song lyrics within the prose. My particular favorite was the Orwellian piece which coincidentally I read the day after seeing the black and white British television adaptation starring Peter Cushing. Bunning's piece beautifully captured the original mood.

I look forward to reading other works by this author.

You have subscribed to alerts for Richard Bunning.

You have been added to Richard Bunning's favorite list.

You can also sign-up to receive email notifications whenever Richard Bunning releases a new book.