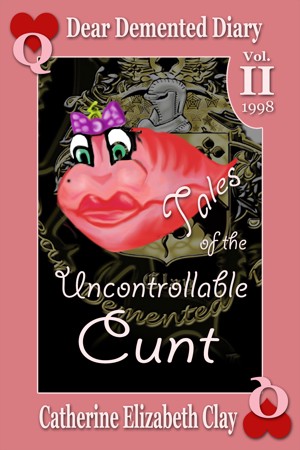 I'm one of the first bloggers in the world, since 1992 as oneopinionatedbitch.com and steadily since 1997 when "blogging" became all the rage. Please donate to my foundation, http://acyst.org to get paid for my efforts. Spread the words out about what it's like to live with "the brain tumor you get to live with" Please help spread awareness. Since nobody else gave a fuck I thought I would. More
I'm one of the first "bloggers" and this is my diary from 1998 where I know I was the first person to travel through Europe and keep my diary up to date on the server using EMACS when I could find an Internet Cafe. My travels take me through Amsterdam, Spain, Italy, the Czech Republic, Russia and The Ukraine. It's about how I discovered my inordinate ability to have an orgasm so strong that I hit the ceiling and how that scared me because the one thing is a woman gets to take her pussy with her.

I am sick of knowing that as I walk the earth no matter what to males, wait... nobody took male from female; men, wait... nobody took men from women; Nobody took he from she; You can grow up a boy and become a woman; and men are just women whose penii or penis' are just outty innies. Your vaginas are on the outside of your bodies and women can have at least 7 orgasms because of the cacophony of muscles we have. So I'm owning it. The Goddess of Japanese fertility perverted by the English to mean something sacred.

I figured since nobody cared about Arachnoid Cysts I would give a few and hope one day things could change enough so kids suffering could go to the ER and not be treated like drug addicts, go to neurosurgeons and be told "Your symptoms are all in your head" since there are so many problems that arise with Arachnoid Cysts. How easy it is to take advantage of you by your family. All the issues that arise. If you have an Arachnoid Cyst please join my group through "the Arachnoid Cyst Foundation" so you have have some kind of voice in how you suffer.

This is just my story but many people have wondered why we are more sexual than most people.

Most of all I'm doing this to raise money for my brain tumor foundation, acyst.org because a three year old should have to tell its mother "I want to kill myself" from the pressure in their head. I know... I was three and I remember always feeling strange in my body and always being too sensitive. I would prefer it if you could donate. Then you can get a tax free donation for whatever you decide to do to help.

I would prefer you buy Dear Demented Diary Vol ii Tales of the Uncontrollable Cunt" off http://deardementeddiary.com over these other places that leave me with 1/3-1/4 of what I put into it. You have to buy it off their website in order for me to make a penny. I'll eventually take my contract away when I get a "real" publisher that donates 1/3 to my brain tumor foundation for which is the main reason I do this since no one else gave a fuck I thought I would.

How do you write a bio when you've been blogging since 1997? I am one of the original web designers because I wanted to shove it to some stuck up computer engineer in 1992/3 that they were going to need the "college of arts and crafts," the college where I was studying photography. He called himself "the emperor" because he wanted "Egotistical Site of the Week", which was THE premiere place to find the newest, hottest websites.

My boyfriend wouldn't do a website so he made me learn. I called myself http://oneopinionatebitch.com and sent in my entry and she was getting married so I was "Egotistical Site of the Week for Six Months". It was awesome. I started to learn about other people from other cultures and not be trapped by what was going on in just my little world studying photography and Russian. It looks a lot the same as it has for over a decade. I think that some of my designs have stood the test of time but they are slowly going to be updated... as I work on my books.

I am a mother, I live in SoCal and feel the radiation of what's to come. I am doing my best to run my brain tumor foundation, The Arachnoid Cyst Foundation, http://acyst.org. I would prefer you donate to my foundation so you can get a copy and not have so much of it go to another company. It's not fair for how people that get to "live with the brain tumor you get to age with" as we suffer in ways people with cancer wish they could. At least they know when they could die where as we are told, "It's all in your head" when we tell doctors about our symptoms they just can't operate because if they tear the pia mater, the root of the nervous system out, they ruin it so it's just easier to tell people that there's not a thing they can do for you because they don't want to learn how to do it.

You can read the stories and like us on the foundation page. I appreciate how you can change the world for the world where Arachnoid Cysts are becoming an epidemic due to the environmental nuclear holocausts where whales ARE going to be a thing of the past and a lot of our children will be facing living with this brain tumor that eventually won't be ignored.

You have subscribed to alerts for Catherine Elizabeth Clay.

You have been added to Catherine Elizabeth Clay's favorite list.

You can also sign-up to receive email notifications whenever Catherine Elizabeth Clay releases a new book.