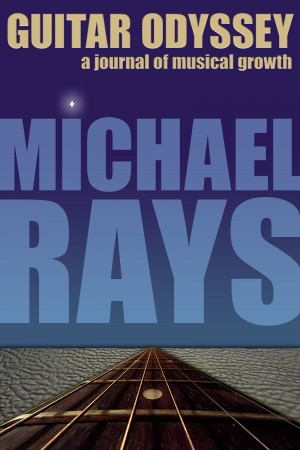 By Michael Rays
Rated 4.00/5 based on 3 reviews
Entertaining and inspiring, Guitar Odyssey is the day-to-day journal of amateur guitarist Michael Rays as he attempts to learn the guitar solo on Deep Purple’s “Highway Star.” Michael dives right in, blissfully unaware the project will take him two years. It's a book for 1) guitarists of any caliber; 2) rock music lovers; and 3) fans of persistence and patience. More
When amateur guitarist Michael Rays decided to learn one of his favorite guitar solos--from Deep Purple's "Highway Star"--he had no idea how long it would take. Months? Years?

The answer ended up being two years. Michael would practice--usually 20-45 minutes on a given day--and then immediately slide over to his computer and write about what had just happened: what he had practiced, how things were going, how he was feeling and anything else that came to mind.

The result is Guitar Odyssey--a psychological travelogue of a guitarist as he pursues something his natural talents don't easily allow. It's also a book about rock and roll, the learning process, pursuing goals and the hypnotic power songs can hold over an individual. For anyone familiar with the challenges of learning a difficult piece of music, Guitar Odyssey is a reminder of the thrill of the chase, and that good things come with patience, persistence and a positive attitude.

Michael Rays grew up in Colorado Springs, Colorado. He graduated from Northwestern University and served nine years in the Navy, flying the SH-60B Seahawk helicopter. Michael lives in Billings, Montana with his wife and daughter.

Michael Rays plays the solo from "Highway Star"
The process of learning this classic rock solo is the subject of "Guitar Odyssey." Michael Rays documents almost every practice session, revealing the highs and lows of this extremely rewarding journey.

About the Series: Guitar Odyssey

Like all guitar players, amateur Michael Rays wants to get better. Will he do it with scale studies? Lessons? NO! He will tackle his favorite rock solos, one by one--and he will write about it. Fellow guitarists will sympathize as Rays experiences the highs and lows of pursuing his rock dreams. It's an entertaining, inspiring journey that's part practice diary, part rock history, part music theory and part amateur psychoanalysis. Great fun for guitar players of any caliber!

Michael Rays is a guitarist. (As well as a father, Navy veteran and ad-man, but those are other books.) Like many of us “gentlemen of a certain age” he has not lost the passion for continued growth and exploration. His self-imposed challenge? Mastery of the guitar solo from “Highway Star”, the 1972 rock classic by Deep Purple. Rays kept a journal of his quest for rock and roll perfection, which forms the narrative structure of “Guitar Odyssey.”

At this point, I have an admission to make: I am no musician. In fact, I can barely play the radio. Is a book about one man's pursuit of guitar solo perfection really the right read for me? I approached “Guitar Odyssey”with some trepidation. Would it be too technical? Too narrowly focused? Would I get it? I'm very happy to say that I did, and I thoroughly enjoyed the book. (I even added to the experience by playing “Highway Star” on Spotify while I read.)

Ray's journal allows the reader to accompany him as he struggles to build his skills. And yes... it was a struggle. His honest story of dedication, frustration, blisters, and triumph goes beyond guitar technique and hard rock trivia. It speaks to what still waits to be achieved by by those who still strive to achieve it.

(reviewed the day of purchase)
Joseph Draw reviewed on on May 10, 2014

Every guitar player knows it. No matter how good you get, there are a lot of other players out there who are better. Michael Rays acknowledges he’s an amateur with a lot of work to do. In “Guitar Odyssey” we get to witness the way he does some of that work – a lot of that work.

He takes on Richie Blackmore’s frantic solo from Deep Purple’s “Highway Star”. He chronicles his progress and his sore-fingered frustration as he picks his way past his own limits. Rays wants to have that one thing he can do that will impress anyone who says, “Hey man, play something.”

He gets there, slowly. Most of us would give up well before the end his “Guitar Odyssey”. That’s what’s appealing about the book. It’s a lesson in determination and perseverance with some humor thrown in between the string-bending.

Read it and you’ll root for Rays to perfect the damn solo already!

The “Highway Star” solo may not be a musical Mount Everest but it’s at least a guitar picker’s Pikes Peak. Climb it, because it’s there, and read it because it’s fun.

(reviewed 26 days after purchase)
Ednor Therriault reviewed on on April 14, 2014

There's a lot more to "Guitar Odyssey" than meets the eye. Yeah, it's fun to follow the progress of (another) amateur guitarist as he tackles one of the most beloved solos in the classic rock canon, but some good life lessons reveal themselves too. Rays is literate, creative, and downright funny. And now he knows a cool solo.

You have subscribed to alerts for Michael Rays.

You have been added to Michael Rays's favorite list.

You can also sign-up to receive email notifications whenever Michael Rays releases a new book.