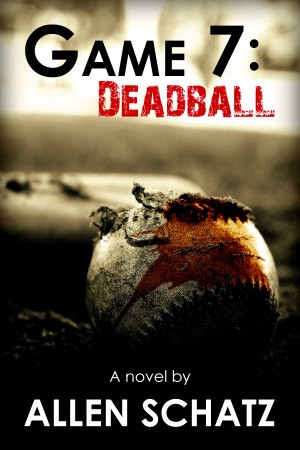 By Allen Schatz
Rated 4.70/5 based on 10 reviews
Major league umpire Marshall Connors believes a vacation cut short is a reasonable price to pay for the opportunity to work the World Series. But that price rapidly escalates when he finds himself in the middle of more than the game on the field. Secrets, lies, and revenge spark a fiery collision between past and present and Marshall quickly realizes some things are better left alone. More
Secrets, lies, and revenge provide the sparks that ignite a fiery collision between past and present…

A puzzle takes shape as baseball’s World Series unfolds, but the pieces don’t fit: a string of missing women, strange threats, gambling problems, kidnappings, and relationships long dormant are all somehow connected, but Marshall Connors--major league umpire--may run out of time before he can solve the mystery.

Marshall’s season has ended and he is looking forward to post-season plans that include some time in Florida, first helping his mentor teach an umpire training class, followed by a lot of sun. Those plans are cut short when Marshall is given a surprise assignment to work the World Series as crew chief, but the real reason is not discovered until he is neck-deep in trouble.

As the Series plays out, so does the truth behind long-buried O’Hara family secrets and Marshall is caught in a storm that threatens to destroy him and those he loves. With the help of his best friend, Thomas Hillsborough--ex-CIA spy--Marshall fights to solve the puzzle before the Series reaches its climax in GAME 7: DEAD BALL, the ultimate contest of survival.
Available ebook formats: epub mobi pdf rtf lrf pdb txt html
Price: $3.29 USD
Buy Add to Library Give as a Gift
How gifting works
Create Widget
Tags: thriller suspense mystery ebook baseball philadelphia world series mlb game 7 umpire phillies
About Allen Schatz

The ability to create something from nothing is probably what I enjoy most about writing. There are no restrictions to hold you back. If you can imagine it, you can include it in your story.

I can’t sew with a needle and thread very well, but I can weave with my words. My ultimate goal is to create a fabric others can enjoy. That so many have in such a short time is a pretty cool thing.

Get yours on Smashwords and wherever eBooks are sold.

I've loved baseball and reading mystery books since I was a child. It is so rare that I get to combine the two. I don't recall seeing a category Baseball mystery but if there is one this belongs in that category.

Marshall Connors is an umpire who worked his way up through the ranks. So when his mentor taps him for the position of Chief Umpire for the World Series he is stunned and honored. When his best friends are involved, his world is rocked - not necessarily in a good way.

The story alternated between omniscient and first person. In this particular story it works well together.

I have put the other two books in this series on my wish to read list.

If you love mysteries and baseball this is a winning combination that I highly recommend.

(review of free book)
Susan Lulgjuraj reviewed on May 5, 2012

As a baseball fan, I'm pretty much a sucker for anything to do with my favorite sport. But at the same time, I'm also very critical.

Game 7: Deadball by Allen Schatz is a mystery thriller with the 2008 World Series as a backdrop. For the record, I was at that World Series, so it was interesting to see how certain things would be incorporated into an event I attended.

The first thing I noticed was how well the book was written. As an indie author, Schatz's writing is very polished. It was a refreshing start because it meant there would be no cringing throughout the book from poor grammar or something else that a good editor could have helped.

It allowed me to just enjoy the book, which I did.

Marshall Connors, a Major League Baseball umpire, is at the center of the book. Connors has to cut his vacation short as he's asked to become crew chief for the 2008 World Series. Not a bad gig, but mysterious and dangerous messages start popping up around Connors until he realizes he's in the middle of a large revenge scheme.

There are a number of characters to track in the book – and at times it felt as though there were too many. During certain passages when there was a mention of a lesser character, I had to go back and remind myself of whom Schatz was writing about.

The difference with Connors and the rest was Schatz's characters was the use of perspective. Connors' passages were written in first person while the others were written in third person. It took some getting used, but I found it interesting.

When I asked Schatz about it he said it was a way for him to incorporate a bit of himself into the character. He wanted the focus to be on Connors although I found myself intrigued by another character, CIA agent Thomas (Suggestion: maybe a book on Thomas' adventure and how he became the person he is).

The book was quick with short sections and chapters only hitting on important moments for each character. There were no long poetic passes. Just action.

It was an enjoyable read and Schatz did a good job of building suspense.

There are two more books currently in the series and I intend to check them out as well.

I thoroughly enjoyed this novel. If you like crime novels and baseball, you will probably like this. Some really good characters and an interesting plot. Well worth reading. I took off a star only because the book seemed to need an atmosphere that was a little more "noir." But that may be just me and the way I like my crime novels.

Allen patiently brings me step after step following the intricate details of intermixed motives and plots. He has a methodical and logical approach in bringing the story to the reader, and he makes sure that the reader does not feel overwhelm while at the same time feels entertained.
I do not know anything about baseball-craze in US but I still thoroughly enjoy this book. Give it a go.

This book kept me guessing, and kept me reading, which is a beautiful thing. The storyline was complex, but easy to follow. Looking forward to following Marshall Connors on his many adventures.

Wow! This one kept me guessing and reading! Great characters and an even better storyline!

There may be other novels featuring baseball umpires as lead characters, but I haven’t read one. It sounds almost like an exercise in a creative writing class: Set the person who is supposed to remain invisible at the center of a story involving love and hate, success and failure, excitement and tragedy. Author Allen Schatz has done that and done it well.

For a good portion of Game 7: Dead Ball, protagonist Marshall Connors knows he’s in the middle of a life-or-death situation. He just doesn’t know whose or what to do about it.

Chosen to umpire the World Series as a surprise replacement for the crew chief who apparently suffered a heart attack, Connors must call balls and strikes on his boyhood friend Terry O’Hara, the ace of the Philadelphia Phillies pitching staff, and Terry’s former USC teammate Nik Sanchez, catcher for the Tampa Bay Rays.

Terry and Nik’s relationship was ruined long ago and now is defined only by animus. A third Trojan teammate, AJ Singer, had an affair with Terry’s mother, and when her husband discovered it, things got very ugly for all involved.

As the Series bounces between Florida and Pennsylvania, millions of fans watch the games on television unaware of the real drama swirling around Marshall Connors. Notes are surreptitiously delivered to him at home plate; meaningful looks are thrown by league security men, and an old-fashioned baseball “message” is delivered by catcher Sanchez – a fastball allowed to blast Marshall in the facemask.

Between games, though, Marshall manages to work in a little romance and tries to help his friend Thomas Hillsborough, an ex-CIA spook who is sort of a law-enforcement-stud-without-portfolio, figure out what’s going on.

You might expect a mystery involving a baseball umpire in the World Series to center on fixing games. Schatz happily has chosen to go in a less obvious direction.

Without giving away the plot, the crimes here include serial murder, kidnapping, extortion, and felony battery. Throw in the inter-generational adultery and some unpaid gambling debts, and you’ve got lots of reasons for people not to like each other.

Game 7 has a huge cast of characters – FBI agents, Major League Baseball officials, ball players, bad guys, innocent victims, and umpires among them. It is to Schatz’s credit as a writer that they’re reasonably easy to keep straight.

If you like baseball and thrillers, Game 7: Dead Ball is a must read. Even those who are only so-so on the national pastime but enjoy complicated plots with well-drawn characters will find Game 7 most satisfying.

For reviews of other low-cost ebooks, please see www.greatbooksunder5.blogspot.com.

I just finished reading this book this morning, and, as with all great reads, I feel sad that it ended. I love when a writer introduces me to a character and I get attached.

I think what I loved most about this book is how Schatz artistically weaved details into every scene. Everything, down to the smallest fragment, popped off the screen. I love when this happens!

I found myself saying when I was a page away from the end of a scene or chapter that I would stop reading for a bit to get some of my own writing down, but when I read the last word, my eyes kept right on reading the next section. I needed to know what happened next!

Great job! I'll be looking to read more from him.

I couldn't put this book down! So many twists & turns, I had to find out how this story ended. Wow!

I couldn't stop reading - I had to know what happened. Definately kept my attention.

You have subscribed to alerts for Allen Schatz.

You have been added to Allen Schatz's favorite list.

You can also sign-up to receive email notifications whenever Allen Schatz releases a new book.