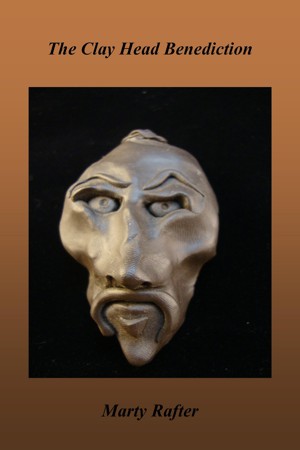 Nothing is worse than working somewhere where somebody tells you what to think, and I've spent the bulk of my life trying to avoid that sort of situation. I did manage to pick up a couple of degrees along the way, and out of necessity, I have put in a little bit of time driving a desk in a cubicle farm, but for the most part, I have worked with my body. Physical work frees the mind from the prostitution of spreadsheets and staff meetings. It also gives me the freedom of time to create. You can see (and read) some of my creations on my website, http://www.rafterspurgatorio.com/ There you will find short fiction, visual art, and a little dose of good old fashioned punk rock to keep the whole thing honest.

Flashes of brilliance overshadowed by lack of craft


“Thank you for writing this book, Marty. I appreciate your commitment and the time you put into this worthy endeavor.


Luke Kolbe is loner, a misfit, a person that makes miniature clay heads in the oven of his kitchen stove. He leaves these sculptures for people to find or gives them away, which is his way “of bringing a sense of wonder into the world.”

As the story progresses we meet some of the people Luke interacts with. None could be called friends. Some are just too weird to have a normal relationship with even for Luke, others are too normal. Though non-threatening Luke’s strange behavior and attitude make people wary and suspicious of him.

As the story progresses the reader begins to realize Luke has some real issues of his own, but despite his “idiosyncrasies” I found him sympathetic, though too eccentric to be likeable.

To be able to write convincingly from the perspective of a person who is mentally unstable is not unique, but certainly a challenge and one that Marty Rafter is up to.

The Clay Head Benediction offers good writing and a plot, when it finally becomes apparent, that is intriguing, but as sometimes is the case they are overshadowed by the lack of craft.

The beginning is so disconnected to the rest of the narrative I almost abandoned it after the first couple of pages.

I came to verge time and time again when confronted by numerous dream scenes presented in large blocks of intimidating solid type that did nothing to advance the plot or develop the character, at least that I could see. If they were metaphors I missed them.

Despite no real goal, motivation or conflict being evident until about two thirds of the way through, something kept me hanging in there. Perhaps it was the flashes of brilliant dialogue that left me as a writer envious, and as a reader wanting more.

They were, unfortunately, too few of them and too much of Luke’s everyday activities described in tedious detail.

Self indulgence with our work is a flaw of all writers. This can be addressed by engaging the services of a professional, dispassionate editor, but who can afford one of them. The next best thing is to recruit a stable of arm’s length beta readers or even an objective critique group to help us “kill our darlings”.

I downloaded this book free from Smashwords as part of an ongoing commitment to read and review the work of self-published authors.

I enjoyed this book. There were moments when I thought I myself was in down town Pittsburgh. Thanks Marty

You have subscribed to alerts for Marty Rafter.

You have been added to Marty Rafter's favorite list.

You can also sign-up to receive email notifications whenever Marty Rafter releases a new book.