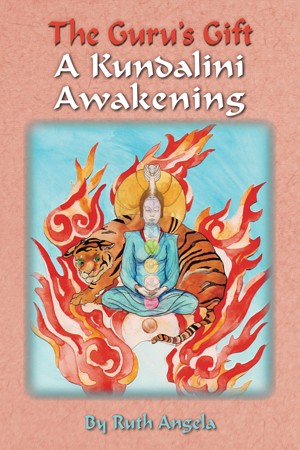 The Guru's Gift: A Kundalini Awakening

A dramatic spiritual awakening in 1979 sent Ruth on a 30-year quest to find answers to this mysterious transformation. Although this is a natural stage of biological evolution, few people in the West knew of it. Ruth asked, Why has this wonderful news of our god-like abilities been hidden? Why do we wallow in depression, when this blissful realm, our true nature, is found within everyone? More
A dramatic spiritual awakening in 1979 sent Ruth on a 30-year quest to understand this mysterious, dramatically transformative experience. Ruth found that Kundalini awakening is part of every culture around the world; it is a natural biological stage of evolution, but virtually unknown in the West. Why are Western people unprepared for this experience when it is part of our biological birthright like puberty? Why when knowledge of this experience is such a spiritually powerfully positive aspect of being human are we kept ignorant? These are some of the topics explored in this quest for knowledge as Ruth struggled to maintain an American middle class life while spinning into other dimensions and levels of reality. Thee culmination came as an experience of the ultimate truth in 1994 bringing clarity to all the drama, seeking, fear and confusion. Ruth does not advocate anyone venturing into this experience without a wise and tested teacher, for as her story reveals, there are many difficulties and discomforts on this journey into the Self. However, the outcome reveals the true nature of what it is to be ‘human’.
Available ebook formats: epub
Price: $6.00 USD
Buy Add to Library Give as a Gift
How gifting works
Create Widget
Tags: spirituality meditation spirituality shaman healing meditation spirit guides spirituality and inspiration spirituality metaphysics transformation inspirational stories
About Ruth Angela

I was born in England and emigrated to the United States in my early 20′s to live with my sister in Texas. I got married, gained a BA in English at the University of Texas and began work as an English teacher. In 1975 I gave birth to my only daughter and soon after we moved to Hawaii, Oahu. In 1979 while raising my daughter, getting a Masters' degree and enjoying the wonders of a tropical island, I was unhappy and unsettled, so my friend took me to a meditation center where I received Shaktipat from a great Indian guru, and my life immediately began to transform.

From a Yuppie wife and mother, I became a mystic able to heal people by intention, able to spin in the air, and understand a thousand things simultaneously while comprehending great secrets of the universe. Because of the disruption this created for my family, I have been researching the phenomena of Kundalini Awakening since 1993. After 20 years, I am satisfied that I have explained for myself what happened to me in those months in 1979 and 1980.

It is my hope this discovery and my relentless research gives my reader some understanding of just how amazing each human being is and can be. This mystery of Kundalini Awakening has been kept hidden from the general public in the West for thousands of years, but it is time now for the veils to be removed. More and more people are waking up as the codes of our DNA are activated. It is time for this book to reveal what is the greatest GOOD NEWS for humanity.

Ruth Angela lives in the San Francisco area and is available for talks on the topic of Kundalini Awakening.

Reviews of The Guru's Gift: A Kundalini Awakening by Ruth Angela

You have subscribed to alerts for Ruth Angela.

You have been added to Ruth Angela's favorite list.

You can also sign-up to receive email notifications whenever Ruth Angela releases a new book.