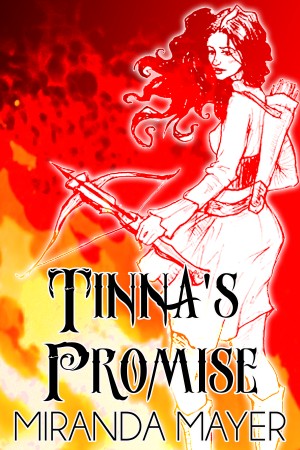 Rated 5.00/5 based on 1 reviews
For Tinna, fitting in means overcoming the fact that she is a foreigner in a land where her people are unwelcome. In spite of this, Tinna manages to find a place for herself in a remote village in the endless forests of Oromoii. There, she discovers the potential for love and belonging; but little could she know that a casual promise could tear her away from everything she worked so hard to find. More
Aside from challenges like discovering why legions of dragons are destroying human cities, finding a way to stop the destruction before it finds its way home before she does; Tinna must also remember that she made a promise to a little boy.

Tinna comes to the north to escape persecution in her own land. She finds Taneth, the child Hanru, and the village of Thamatoc where she is welcomed in a way she's never known before. She is happy here; comfortable enough to consider love, and even to make promises. However in the act of pursuing this promise, Tinna and her companion are inadvertently swept up into a succession of events that will take them across their world. Tinna becomes embroiled in a strange one-sided war, where she becomes burdened with a secret no single person should ever bear alone.

Tinna has finally found a place to belong, and people she can truly love. Can she protect them from the hideous truth? But more importantly, will she ever find her way back to them?

Tinna’s Promise is a sweeping adventure with the requisite beasts and bastions of a fantasy world. However Tinna’s Promise also has characters with frailties and flaws; reflections of our own world woven into the story. It’s about simple things; like keeping a promise, and about greater things; like accepting change, and growth. Follow Tinna as she discovers friendship, belonging and love; as she uses her wit and her strength to hold onto it.
Available ebook formats: epub mobi pdf rtf lrf pdb txt html
First 5% Sample: epub mobi (Kindle) lrf more Online Reader
pdb
Price: $2.99 USD
Buy Add to Library Give as a Gift
How gifting works
Create Widget
Tags: adventure child abuse dragons plague dragon abuse fantasy adventure strength strong women promise promise kept dragon war strong woman shero
About Miranda Mayer

Miranda Mayer lives in the Mount Hood territory of Oregon. A polyglot, artist, avid historic costumer and lifelong equestrian; her interests are broad, and edge on geekery most of time. She is married, and is a new mother. Miranda's stories range from Science Fiction to Urban Fantasy to Fantasy. She writes from her heart, imbues her writing with her quirky humor, and tries very hard to make her characters as real and three-dimensional as possible. Her unpredictable and rather Attention-Deficit-Disordered nature guarantees that her stories will take readers to unexpected places.

About the Series: Trilogy of Tinna

Tinna was raised amongst a violent matriarchal society; but as an impure misfit, she needs a place to belong. Her journey north brings her to a land where she feels at home; however instead of molding herself to shape the society she's in, she ends up shaping society to accept her. But the price of such means that she becomes burdened with responsibilities and tribulations that are world-changing. Follow Tinna's Journey from fighter to empress, in the Trilogy of Tinna.

Also in Series: Trilogy of Tinna

Tinna’s Promise is a story of change and determination; and keeping a promise above all. The story revolves around Tinna, an assassin from a matriarchal society; ostracized for her heritage, she wanders northwards to find somewhere to belong. She finds Taneth, an awkward, somewhat nerdy, even a bit arrogant man, who is Wiseman for a village of horse-worshippers. Tinna is immediately drawn in to their simple way of life, and drawn to the clumsy Taneth. Part of this world is a boy named Hanru whose own life is rife with troubles and abuse. Both Tinna and Taneth take the boy under their wings, and Tinna makes the boy a promise.

Unfortunately, Tinna is derailed on her attempt to fulfill this promise, and somehow brought into the middle of a seemingly unexplained battle between dragons and the human races. Tinna is now faced with finding her way home from a great distance, contending with this violent war with dragonkind, keeping her promise to Hanru. She also has to begin coming to terms with her own feelings about Taneth, and possibly a new life amongst the Horse-Worshippers. But none of that will matter unless she and her companion Rhoa survive the ordeal.

First-time author Miranda Mayer takes an ambitious leap into creating an original fantasy world. Her characters have realistic flaws, and the story has a gritty, human quality to it that makes it one of the more exceptional fantasy books I’ve read this year. The author makes the bold step of starting the book off with characters that might not be as likable as one would expect; she writes selfishness, arrogance and pride into them. She touches on subject matter not many fantasy authors care to, and keeps the interactions among the most realistic I’ve read in a long time. I particularly enjoyed the quiet conversations between Tinna and Taneth as they get to know one another in the beginning of the book.

As you read along, the characters grow on you; you watch their characters change and develop. It is a very well written story, which perhaps could have been padded a little more with descriptions. I was left wanting for descriptions of the forests of giant trees where the Nimrath live, and perhaps a closer study of Tinna’s homeland and heritage. Despite these missing elements, they did not take away from the story. I especially enjoyed the way she painted the Araki graveyards. Beautiful.

I highly recommend this book to all fantasy readers. Especially the lady readers. The book does have some minor sexual content, so I recommend it for more mature readers. Odyssey Reviews gives five stars for this book.

You have subscribed to alerts for Miranda Mayer.

You have been added to Miranda Mayer's favorite list.

You can also sign-up to receive email notifications whenever Miranda Mayer releases a new book.