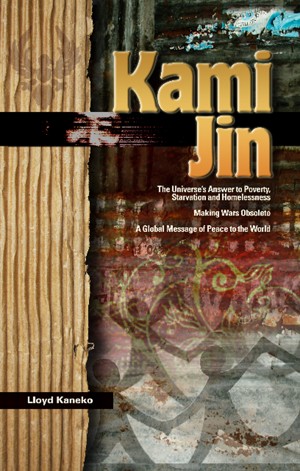 By Jason Shohara
“Kami Jin” chronicles the life of protagonist, Gordon Sakata, as he describes his challenging, yet victorious life in the 23rd Century in two worlds – one a troubled life on Earth, and then later on the utopian planet of Xychron. With a global unemployment rate of 95%, Sakata returns to Earth to save those in despair and the homeless and takes them to a distant planet to live in paradise.

Jason Shohara (aka Lloyd Kaneko) is a native of Los Angeles, born in Boyle Heights in April of 1951 and spent his early childhood education at St. Elizabeth Day Nursery School, Utah St. Elementary School, and Maryknoll School just on the outskirts of downtown Los Angeles. Later, his family moved for a few years to another section of Boyle Heights and he attended Malabar St. Elementary School before moving to Monterey Park, California.

After graduating high school, he attended East Los Angeles College from 1969-1971 and then transferred in 1971 to California State University, Long Beach where he graduated with a Bachelor of Arts in English-Creative writing in June of 1974.

In 1982, he attended the University of California, Los Angeles where he obtained an advanced interdisciplinary degree in Training and Human Resources Development.

In 1972, Jason published his first magazine article as a guest writer for Drum Corps Digest. Later in the 1970s, he became Senior Staff Writer for Drum Corps News of Boston, Massachussetts and wrote cover and feature articles covering major drum corps competitions in the nation as well as the Southern California area.

After graduating from UCLA, Jason became a professional Trainer/Technical Writer and produced numerous training and user manuals on computer systems for financial industries as well as aerospace companies. He also developed highly techical manuals for utilitiy companies as well in the capacity as consultant.

During his college years, Jason attended workshops sponsored by the Writers Guild of America, West and has learned the art of screen and teleplay writing. At Cal State Long Beach, he developed the art of writing poetry, theatre arts, short stories, fiction, non-fiction, and journalism. Lloyd has studied Creative Writing under Dora Beale Polk.

You have subscribed to alerts for Jason Shohara.

You have been added to Jason Shohara's favorite list.

You can also sign-up to receive email notifications whenever Jason Shohara releases a new book.