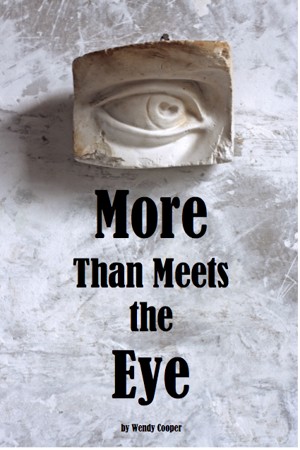 More Than Meets the Eye

By Wendy Cooper
Rated 4.00/5 based on 3 reviews
Natasha works as an investigative assistant for a private investigator. She knows that her employer is a werewolf. But during the course of a gruesome murder investigation she discovers something about her self that will change her life forever.
Download: epub mobi (Kindle) pdf more Online Reader
rtf lrf pdb txt
Price: Free! USD
Add to Library
Create Widget
Tags: detective werewolf

Reviews of More Than Meets the Eye by Wendy Cooper

A very enjoyable read.
Good analytic review by Tim Pollard.
Various weak plotting elements did not detract from the tale, and the spelling mistakes were easy to overlook.
A bit clichéd that a Russian, living for many years in USA, with a good vocabulary, couldn't say 'yes' or 'no' in English.

This book has various weaknesses, more on them later, but it's strength lies in it's characters, who are generally likable and interesting, particularly the protagonist. Which is a good thing because neither the plot nor the ideas contained in the book are particularly strong, so the entertainment value of the book almost entirely rests on the shoulders of the protagonist; fortunately Cooper manages to make this work.

Natasha, the protagonist, comes across as a good person, and you naturally want to see good things happen to her, but, and this may be a problem for some people, she is also very definitely a feminine heroine; she tends towards being reactive rather than proactive, passive rather than active. While the authoress describes Tasha as having martial arts training and significant combat skill, she never actually demonstrates it. This isn't to say that she isn't a courageous character, but most of the action burden falls on the males that surround her.

To give an example the two biggest action scenes in the book actually involve Natasha courageously running _away_ from the danger. And I'm not being sarcastic here when I say courageously; in both cases she's leading the danger away from someone else, or towards a trap. She is certainly a heroine, and not just the "heroine" of this story, but she is equally certainly not an _action_ heroine.

There are some hints of a Mary Sue in the main character, in that she's a magical special snowflake essentially, and I wouldn't be at all surprised to find that Wendy Cooper looks a lot like Natasha. ;-) On the other hand, the author has made Natasha a legitimately likable person, and not just someone that the characters all like for no good reason. (Though pretty much all of the good characters do like her, based on how she treats them you can easily understand why they do)

The one character weakness of the book is the antagonist; for much of the book the antagonist isn't even involved in the events going on, and after he comes onto the scene he isn't given any depth, or particularly interesting personality or background.

There's also some editing and formatting problems with the book. In my case they weren't enough to ruin my enjoyment of the book, but some people might be more sensitive to such issues. (I find it relaxes me to circle problems I find in books as I read them, so I've got a list of problems I noticed if the author wants to contact me with the email address on my profile)

I'm male and tend to prefer more action-orientated rather than romance-orientated fiction, so I'm a little out of the target audience for this book, but I never-the-less enjoyed it, and found myself losing a bit of sleep so I had time to finish it, so I'd give it a rating of "Good/Recommended" or four stars.

* The main characters are interesting and likable.
* There isn't any overt political or religious message.
* The characters don't offend my broadly conservative morality, but neither do they shove their morals in your face, so they will most likely not offend you even if you disagree with me.

* The Plot is lacking, and the antagonist is weak.
* The "mystery" elements are rather limited.
* The book needs some more work on editing and formatting.

Ideal Audience:
Women who like paranormal romances, but prefer their heroine not to sleep with every Tom, Dick, and Harry who makes her all hot and bothered.

An enjoyable read. Interesting mystery. Easy to follow and full of good detail. I like a book to capture my interest from the start and hold my attention. This book did just that.

You have subscribed to alerts for Wendy Cooper.

You have been added to Wendy Cooper's favorite list.

You can also sign-up to receive email notifications whenever Wendy Cooper releases a new book.