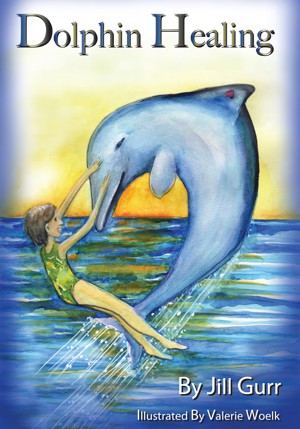 By Jill Gurr
A 10-year-old girl fighting cancer is inspired to live through her love for a dolphin. She becomes the leader of a small movement to save dolphins from tuna nets used by the greedy owner of a local fishery where her mother works. The girl becomes globally famous for her efforts to save dolphins, and gains the popularity that she’s always craved. She and her sister also grow closer. More
DOLPHIN HEALING includes 18 detailed illustrations by artist Valerie Woelk.

Being bullied makes 10-year old Julie feel miserable, but she has a bigger challenge to overcome when she discovers that she has cancer. It's scary being in the hospital for treatment. Her older sister is jealous of all the attention that she receives from their single mother. Julie returns to school after losing all her hair. Classmate Danny embarrasses her in front of the entire class. She runs away to her secret spot high on a cliff above the ocean where she meets Dreamer. He's a special dolphin and through their friendship, she heals.

Julie learns from Paul (a marine biologist) that the owner of the local fishery where her mother works is killing dolphins to capture tuna fish. He tries to enlist Julie's mom to help him stop this fishery. Even though Julie's mother is mutually attracted to Paul, she resists his efforts to get closer to her. Julie becomes a role model for her mother when she strives to save dolphins from the nets. However, she's traumatized when she discovers that Dreamer has been killed. Julie relapses with a severe case of leukemia.

Julie is dying and nothing can save her, but just when there's no hope for her survival, she learns a new visualization technique. She finds out that her thoughts and feelings can affect her disease through a science called psychoneuroimmunology. As the girl regains good health and self-confidence, her popularity soars and she receives support for the rally that she organizes in her town to save the dolphins. Through media attention, Julie is finally able to help save the dolphins by raising funds for the Dreamer Research Center that's run by Paul. Romance blooms between him and Julie's mother, and the girl grows closer with her sister. Her new friends, and people from all over the world, cherish Julie.
Available ebook formats: epub mobi pdf rtf lrf pdb txt html
First 20% Sample: epub mobi (Kindle) lrf more Online Reader
pdb
Price: $6.98 USD
Buy Add to Library Give as a Gift
How gifting works
Create Widget
Tags: cancer kids children fantasy novel healing disease hospital dolphin visualization chapter book activism activist alternative healing cetaceans dolphin healing psychoneuroimmunology
About Jill Gurr

Jill grew up on Long Island, NY and has a B.S. in Broadcasting & Film from Boston University. She traveled extensively and is fluent in Spanish, French and Italian. For more than 25 years, she worked as a script supervisor on award-winning feature films, TV programs and commercials with major actors and directors, all over the world.

She has written 16 original screenplays and seven as a writer-for-hire. Jill adapted the novel Hit and Run by James Hadley Chase, which was produced as Rigged, starring George Kennedy. She also wrote a PBS pilot, "Socrates" as part of The Immortals series, which stars Ed Asner.

In 1996, Jill founded Create Now, a nonprofit organization that transformed the lives of youth in need through arts mentoring and experiences (www.createnow.org).

Jill resides in Los Angeles, CA. She's available as a speaker and a consultant in youth mentoring, and as a freelance writer.
She can be reached at: jillgurr@gmail.com.

You have subscribed to Smashwords Alerts new release notifications for Jill Gurr.

You have been added to Jill Gurr's favorite list.

You can also sign-up to receive email notifications whenever Jill Gurr releases a new book.