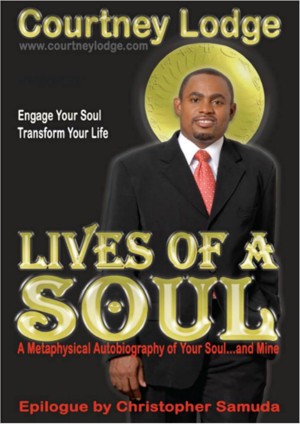 Lives of a Soul--A Metaphysical Autobiography of Your Soul...and Mine

Courtney George Orlando Lodge, is the author of Lives of a Soul--A Metaphysical Autobiography of Your Soul...and Mine!

Courtney was born in the mystical island of Jamaica on June 11, 1970. His Soul-influenced birth and development has created near astounding results for him, and he shares this story in his book so that you too can live a Soul-Powered life.

Blessed with an alluring personality and powerful motivational speaking skills make Courtney a well sought-after public speaker. Before he is through with a presentation, you and your team members, relatives and friends will usually start feeling a major shift in the way you have lived and will live your lives.

Courtney Lodge is currently the Vice President of Branch Distributions at the Victoria Mutual Building Society (VMBS-- www.vmbs.com ), which is the second largest mutually-owned "savings and loans" financial institution in Jamaica and the wider Caribbean. He has responsibility for all the branches across Jamaica, and the representative offices in the USA, Canada, and the United Kingdom.

He started his career in 1987 as a Constable of Police in the Jamcaica Constabulary Force (JCF) and has since served as:

* Chief Executive Officer (CEO) at the Caribbean Confederation of Credit Unions (CCCU), www.caribccu.coop In this capacity, Courtney has oversight responsibility for over 342 credit unions in 18 Caribbean countries

* He owns a consulting firm (Strategic Corporate Interventions Ltd), www.courtneylodge.com Courtney has worked in North and South America, Europe, Africa, Asia and the Caribbean. He has consulted for or otherwise represented organizations such as the Inter-American Development Bank (IDB); the Commonwealth Secretariat; the Caribbean Association of Industry and Commerce (CAIC); and the Caribbean Assocaition of Indigenous Banks (CAIB).

* He is currently a Director on the board of the GSB Credit Union, and the Jamaica Paralympic Association.

* He also served as the Assistant Chairman of Tacky High School in St. Mary, and the Treasurer of the Jamaica Police Credit Union.

Courtney holds a Bachelor's degree in Finance from the University of the District of Columbia, Washinton, DC; and a Masters degree in Business Administration from the Nova Southeastern Universtiy, Florida.

Courtney's personal mission is: To maximize his talents and the talents of others, and to enhance my personal well-being.

Courtney's personal motto is: I work to learn, not just to earn. I allow my assets to earn for me. My assest generate multiple streams of increasing income.

Lives of a Soul--A Metaphysical Autobiography of Your Soul...and Mine
Lives of a Soul takes you on a spiritual and “Soulical” journey of several lifetimes. The revelations in Lives of a Soul flow through the narrow pipes of science, philosophy, religion, and other human physical and intellectual illusions and take you to the unending oceans, worlds, and realms of Ultimate Reality. Lives of a Soul will transform your spiritual and Soulical life…for good!

Lives of a Soul--new book by Courtney Lodge
This metaphysical autobiography of your soul...and mine...takes us on a soulical journey of several lifetimes. This mystical, spiritual, inspirational and autobiographical thriller boasts a beautiful, personal and engaging writing style as Courtney Lodge illuminates the "human illuminati", dislodge's myths of the Masonic Lodge, engineers soul-based pre-natal genetic engineering, and much more.

Reviews of Lives of a Soul--A Metaphysical Autobiography of Your Soul...and Mine by Courtney Lodge

You have subscribed to alerts for Courtney Lodge.

You have been added to Courtney Lodge's favorite list.

You can also sign-up to receive email notifications whenever Courtney Lodge releases a new book.