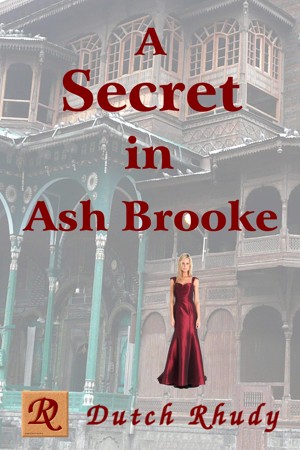 A Secret in Ash Brooke

By Dutch Rhudy
A small town newspaper reporter's sleuthing hobby, uncovered an exceptional likeness between two young women. Each portray different lifestyles; one most proper, the other of questionable moral values. Their overlapping timetables created an impossible situation. One person cannot possibly be in two places at the same time. Or can they? Assumed correct, his quest continued to learn the truth. More
A Secret in Ash Brooke
by
Dutch Rhudy

A small town detective agreed to mentor a local newspaper reporter, who wished to enhance his sleuthing hobby. In the process of improving his observational skills, the reporter scrutinized various citizens torso and behavior. As his facial recognition abilities increased, he grew more aware of subtle similarities and differences.

The reporter soon became intrigued with an exceptional physical likeness between two young women. Each portray different cultures, and appear nothing alike in manner of dress, or in their separate lifestyles. The reporter, convinced they must be twins, maintained a constant vigil on his suspects.

He befriended one of these ladies to learn more about her. All attempts at justifying to himself she was a twin, proved futile. Subtle comments among her friends and family, confirmed she had only one sibling, an older brother.
These facts led our sleuth-hound reporter, to believe these two women were one in the same person.

Turning his attention from the proper lady, with her strict religious upbringing; to the one of questionable moral values. His observations only invited confusion, and generated unanswered questions. Each time his suspicions exposed another clue, a positive clarification negated the probability.

Their timetables overlapped, and one person cannot possibly be in two places at the same time. Or can they?
Certain his assumptions are correct, our reporter continued his quest to learn the truth.

Log Line: How can she be in two places at the same time?

Dutch Rhudy, referred to by his peers as the master of Mystery, Mayhem and Madness; resides in a quaint post war cottage, conveniently nestled amid the tall forest timber, just above the foot of Bluff Mountain. The faint din emanating from many forest creatures, birds and pets; subdued only slightly by the forceful rush, permeating the area from three beautiful waterfalls as they cascade off Trident Tines Plateau, into nearby pristine Emerald Glass Lake.

Any similarity to serenity, abruptly ends right here. For this mysterious Author of Mischief is about to enter his study. Or should I say, make an attempt at entry. The rustic flagstone path leading from the cottage to his office is strewn with several shallow dishes, filled twice daily with all manner of foodstuffs for his many forest friends. With a quick two-step, hop-scotching around and over the pans, his feet manage to find a surviving clear landing spot at the study door.

Carefully balancing a suet cake atop the sack of bird seed with one hand, he reaches for the doorknob with the other and gives it a sharp push, then quickly catches the suet as is it leaps from the sack. He stands in the doorway carefully eyeing over the situation, seeking a place, anyplace, where he can set down the suet and sack of feed. A profusion of every trinket imaginable, interesting articles and gifts from patrons; items Rhudy had gathered to study and perhaps use as a cue for a scene in a novel, leave not a square inch of surface or floor area.

Visitors stand at the door in awe, often afraid to enter; only someone with a very tiny foot could find the few safe stepping spots, that lead from the door to the authors desk. Some patrons have left screaming that the study was haunted, claiming they heard it both breathe and talk. Things do move around in the study; however, it's only a shy kitten keeping an eye on the visitors from under yet another pile of loose manuscripts and magazine clippings. In this setting of Pandemonium Plus, an occasional voice is sometimes heard by visitors. It is only Rhudy's pet Amazon parrot, who is normally only a chatterbox when Rhudy needs his quiet time the most.

Born in the mid 1940s, Rhudy, one of the first of the baby-boomer generation; actively interacted with older aunts, uncles and grandparents from the pre-1900s era. Every relative had a story to tell about the good old days, about their pioneer ancestors, farming and the many antics they pulled as children themselves. Then, the conversations changed tone to the more serious matters that they and their children were faced with; how crime escalated over the years and how they confronted these issues. Each generation added more unique stories of mirth and suspense which have found their way into Rhudy's mental archives.

As a young man, Rhudy worked evenings as a disc-jockey and script writer; handling many announcements and commercials aired by a small radio station. Once available for full-time work, he assisted with a small advertising firm and worked as a ghost writer for a columnist. Through this association more work followed; with a request to ghost write several appealing novels for teens and young adults, his career was under way and consumed over a decade before he took a break from writing.

Life in general, along with raising a family, left very little quiet time in which to write. However, Rhudy managed to maintain a weekly bulletin for twelve years and a newsletter for six years, three years of which were concurrent with the weekly bulletin. Readership and circulation of both publications increased dramatically, to the point the president of the worldwide organization, sent a letter of commendation for his achievements.

As time marches on, Rhudy is getting on up in years; the nest now deserted, by those who helped turn his hair gray, still comment that it thins a bit more each day. Peace and quiet returned to the Rhudy household; in retirement, he finally has the time to release the many colorful stories, spanning over 150 years. Included within each story are glimpses into the history of his hometown, daily life and the many crimes from past to present. Mysteries, unsolved for years, come alive when the detectives at Rumbleigh Investigations reopens each case.

Dutch Rhudy has spent more than two years compiling diaries and notes, writing the many stories generated during the long history of his hometown and ensuring each key character, structure and home is well documented and in perfect chronological order. This massive, all-encompassing back-story, with complete history, ensure that the novels will flow properly and eliminate confusion to the reader, regardless of the era in which a scene takes place.

Often called "That Mysterious Mystery Solving Mayor of Roaring Falls," Rhudy claims he solves no crimes, nor does he appear in the stories; he allows the unraveling of each mystery be conducted by the world-renowned Rumbleigh Investigations. Dutch Rhudy chuckles when called "The Keeper of the Keys and Honorary Mayor of Picturesque Roaring Falls." Only he knows the key that there is much more about Roaring Falls than appears on the surface; If there is a secret to discover; a scandal, a sinister character, a hidden romance, or clue for solving a crime; someone will invariably let it slip out.

You have subscribed to alerts for Dutch Rhudy.

You have been added to Dutch Rhudy's favorite list.

You can also sign-up to receive email notifications whenever Dutch Rhudy releases a new book.