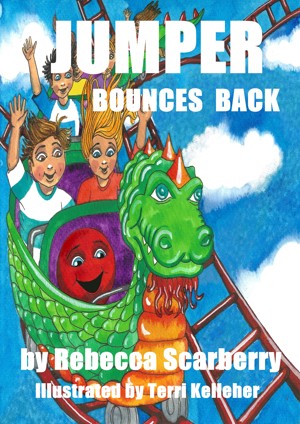 By Rebecca Scarberry
Rated 5.00/5 based on 1 reviews
Jumper’s adventures continue after his escape from Little Tykes Toys & Bikes. He’s a big friendly red beach ball that children love. Join in the fun as Jumper tells you all about his summer escapades. With the help of Mr. Wind, he meets many new people and the fun is non-stop. This is the second book in the Jumper series and it has a bonus coloring page.

Rebecca Scarberry was born in Southern California. She retired as a claims analyst for an HMO in Las Vegas, Nevada. She lives on a very secluded non-working farm in the Boston Mountains of Arkansas with her husband and five cats. She has devoted her time to writing fiction since 2009 and has self-published works in four different genres.

She published her debut, Messages from Henry in June 2012. It was written for young adults but many adults are finding it very entertaining. The sequel, Where Love Takes You, was published in August 2013. On December 10, 2012, she published a short story called, Rag Doll. This very short story is for adults only. It’s a spicy crime drama, and many readers were taken by surprise by the twist in the end. She’s now being compared to O’Henry. She has since published three children's picture books. It's called her Jumper series, about a funny red beach ball; telling the readers all about his adventures away from the toy store. Children, age 4 and up, want Jumper on TV. She has currently written the script for one episode and will attempt to make this a reality.

What a fine sequel to the original picture book, Jumper. This time our fun-loving red ball finds a home with a toddler who loves to play with him every day. But, taking Jumper everywhere to play lets the wind blow Jumper away on one adventure after another that your little ones will really enjoy. It was good to see the wind have a few kind words for Jumper in this book. We always imagine the wind just howling or whistling, so it's a refreshing new slant on the wind's character to have him helping to get Jumper back home. But, you know that old wind is a ramblin' man. He blows and blows and away Jumper goes. If your children like down-to-earth characters in interesting and colorful settings with lots of action, you and your kids will find Ms. Scarberry is the master chef of home-style, fun picture books. Ms. Kelleher reprises as illustrator, so her wonderful and stylistic illustrations return for more Jumper action. There is a nice surprise ending that effective highlights sharing and caring. I recommend Jumper Bounces Back for you to read to your kids before bedtime.

You have subscribed to alerts for Rebecca Scarberry.

You have been added to Rebecca Scarberry's favorite list.

You can also sign-up to receive email notifications whenever Rebecca Scarberry releases a new book.