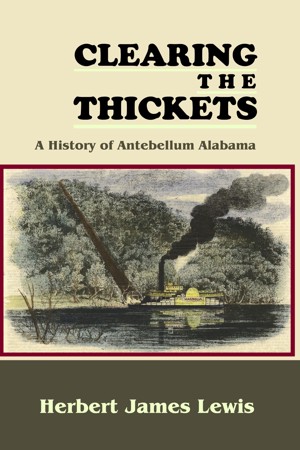 Clearing the Thickets: A History of Antebellum Alabama

The book begins by exploring the colonial period during which three European powers—Spain, France, and Great Britain—continually vied for control of what was to become part of Alabama. Each culture, along with the Native American communities that lived throughout most of the region, contributed to the development of the emerging territory and left its enduring stamp. Later chapters examine Alabama's territorial period, the Creek War of 1813-1814, the Constitutional Convention of 1819 and statehood, the first years of state government in Cahaba, removal of the capital to Tuscaloosa, King Cotton and the ignominy of slavery, further relocation of the capital to Montgomery as secession loomed, and social and economic advances during the antebellum period that were interrupted and stunted by the tragedy of secession and war.

Herbert James "Jim" Lewis earned his B.A. in history, and his law degree, from the University of Alabama. He clerked for the Alabama Supreme Court, served in the U.S. Air Force as an Assistant Staff Judge Advocate, and practiced for more than 25 years as an Assistant U.S. Attorney in Birmingham, Alabama. The Alabama Review published his 2006 article concerning one of Alabama's earliest attorneys, and since 2007, Lewis has edited or contributed numerous articles to the comprehensive Encyclopedia of Alabama.

You have subscribed to alerts for Herbert James Lewis.

You have been added to Herbert James Lewis's favorite list.

You can also sign-up to receive email notifications whenever Herbert James Lewis releases a new book.