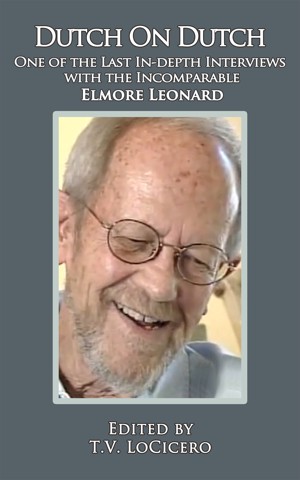 Dutch on Dutch: One of the Last In-depth Interviews with the Incomparable Elmore Leonard

WHAT THEY’RE SAYING ABOUT DUTCH ON DUTCH:

“…a fantastic interview—amazingly rich and informative and wonderfully telling of his character.”—Victoria Best, Tales from the Reading Room

“He really was such an amazing man. The attitudes and approaches to writing he expresses are always entirely consistent and he has a way of demystifying the process, treating it not as being some gift from the gods, nor as being easy but as a craft that has to be worked at.”—Bill Kirton, author of The Figurehead

T.V. LoCicero has been writing both fiction and non-fiction across five decades. He's the author of the true crime books Murder in the Synagogue (Prentice-Hall), on the assassination of Rabbi Morris Adler, and Squelched: The Suppression of Murder in the Synagogue. His novels include The Car Bomb and Admission of Guilt, the first two books in The Detroit im dyin Trilogy, and The Obsession and The Disappearance, the first two in The Truth Beauty Trilogy, Seven of his shorter works are now available as ebooks. These are among the stories and essays he has published in various periodicals, including Commentary, Ms. and The University Review, and in the hard-cover collections Best Magazine Articles, The Norton Reader and The Third Coast.

About what he calls his “checkered past,” LoCicero says:

“At one time or another I've found work as an industrial spy; a producer of concert videos for Rolling Stone's greatest singer of all time; one of the few male contributors to Gloria Steinem's Ms. Magazine; a writer of an appellate brief for those convicted in one of Detroit's most sensational drug trials; the author of a true crime book that garnered a bigger advance than a top ten best-selling American novel; a project coordinator/fundraiser for a humanities council; a small business owner; the writer/producer/director of numerous long-form documentaries; a golf course clerk; a college instructor who taught courses in advanced composition, music and poetry appreciation, introduction to philosophy, remedial English, and American Literature--all in the same term; a ghostwriter; a maker of corporate/industrial videos; a member of a highway surveying crew; a speechwriter for auto executives; a TV producer of live event specials; an editorial writer; the creator of 15-second corporate promos for the PBS series Nature; and a novelist.
“There is a sense in which that last occupation was the reason for all the others. Almost anyone who's ever tried to make ends meet as a novelist knows what I'm talking about.”

You have subscribed to alerts for T.V. LoCicero.

You have been added to T.V. LoCicero's favorite list.

You can also sign-up to receive email notifications whenever T.V. LoCicero releases a new book.