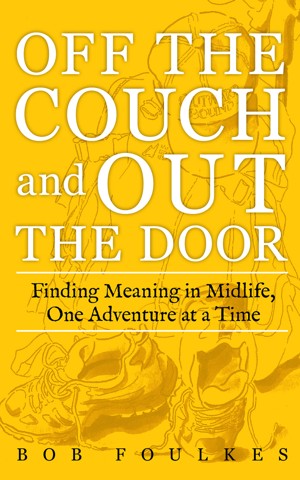 Off the Couch and Out the Door: Finding Meaning in Midlife, One Adventure at a Time

By Bob Foulkes
In Off the Couch and Out the Door, Bob Foulkes shares two decades of personal adventures that helped transform a midlife crisis into a midlife breakthrough. From marathons and triathlons to trekking and adventures of the heart and soul, Bob’s quests take us from beautiful locales in his own backyard to exotic destinations as far-flung as Morocco, India, Kuwait, Ukraine and more. More
Somewhere around middle age, inspired by his children and determined to overcome a life characterized by stress, ennui and more than one bad habit, Bob Foulkes sets out on his first big adventure. That Outward Bound trek through the Coast Mountains of British Columbia opened the door to a lifetime of adventures that have energized, enlivened and inspired him ever since.

From marathons and triathlons to trekking and adventures of the heart and soul, Bob’s quests take us from beautiful locales in his own backyard to exotic destinations. He becomes an unapologetic adventure junkie, compelling him to places as far-flung as Morocco, India, Kuwait, Ukraine and more.

Through animated detail and charming, self-deprecating humour, Bob shows us that, whatever our age, means or circumstances, everyone can have thrilling adventures. We just need a little discipline, a bit of enthusiasm, a dollop of common sense and, finally, a tiny push to get off the couch and out the door.

Bob Foulkes is a communications consultant and writer with extensive experience in business, energy policy, government, politics and media. He served on the staff of two federal Cabinet Ministers. He has three degrees including a Masters in Management from the Sloan School at MIT where he attended as a Sloan Fellow. He has run 10 marathons, many triathlons including a half ironman and now road bikes for fun. He has served with the United Way, Vancouver’s Central City Foundation, the Vancouver 2010 Bid Committee and the Stratford Shakespeare Festival. His first book, Adventures with Knives (www.adventureswithknives.com) chronicles his 6 month chef’s training program at Vancouver’s Pacific Institute of Culinary Arts, where he was judged best graduating student in the culinary program. He cooks for friends and family and special events. He blogs about his latest adventures at www.bobfoulkesadventures.com.

You have subscribed to alerts for Bob Foulkes.

You have been added to Bob Foulkes's favorite list.

You can also sign-up to receive email notifications whenever Bob Foulkes releases a new book.