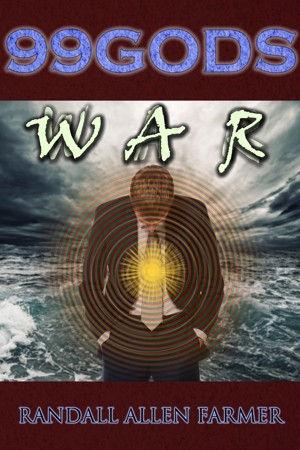 By Randall Allen Farmer
Rated 5.00/5 based on 1 reviews
99 Gods appear on modern day Earth with a mission to end national war and do good. Results don’t quite work out that way. Not only do the 99 Gods cause economic and political mayhem, they force many hidden powers into the open, including telepaths, magicians, and demon hunters. They, the Gods, and many other hidden powers and normal people find themselves trapped in a new kind of war. More
Dave Estrada’s cadmium poisoning threatens his life. His options gone, the successful business co-owner turns to the 99 Gods for help. Who are the 99 Gods, though?

“I’ll make this short and sweet, as I’m not accustomed to public speaking in forums like this. As you’ve just seen, I can do miracles. My name is Dubuque, I’m a Living Saint directing God Almighty’s miracles, and I am but one of 99. We’re here to end national war, a new commandment sent by God, and our creators trained us in how to end wars. Beyond that, we’re here to do good.” So said Dubuque, a North American Territorial God, on the day of his arrival. The people of Earth, shocked and pleased at the sudden appearance of the 99 Gods, expect utopia. Dubuque also says: “The last thing our creators said to us was ‘Your capability to change the world does have limits. As we have hinted before, you are not alone.’ I take that as a warning to us Living Saints to be cautious, and cautious I shall be.”
Who, then, are the 99 Gods peers?

Dave’s decision to seek miraculous aid from the 99 Gods will thrust him into an emerging conflict involving the 99 Gods. His initial pragmatic reaction to the 99 Gods – “With the 99 Gods around, though, where’s the need for faith? You can just go ask them” – will face repeated tests. The choices he makes will irrevocably change his life.

The just-starting-out Territorial God, Atlanta, is responsible for doing good in the southeastern United States. “I don’t even pretend to be as limited as a CEO,” she says. She senses some of the other Gods doing other than good, though, and decides to confront them about their activities. Her choice introduces her to God politics and puts her in danger, showing her how much more complicated the God business is than her previous profession as a Marine aviator.

Nessa Binglehauser, who lives alone in Alaska, recently lost contact with her collaborator Uffie, a research primatologist. An old friend, Ken Bolnick, convinces her that one of the 99 Gods kidnapped Nessa’s collaborator. Their ability to know what the 99 Gods are doing in private marks them as special. “These Gods remind me of puppy dogs,” Nessa says. “House-training them is going to take a great many whacks on the nose. What happened to their sense of ethics and morality, anyway?” Nessa and Ken’s own sense of morality calls upon them to investigate the 99 Gods. To succeed, they will have to reveal themselves and their hidden abilities.

“Thy will be done. I submit myself to you. Whatever thou wilst, let it be done to me,” John Lorenzi prayed. He, an abnormally long-lived magician hunter and holy man, initially welcomed the Gods – until one of the Gods attacked him and marked him for death. How far will he go to defend himself against the Gods?

Greetings.
I am an author, science nerd, an amateur photographer, a father, and a pencil and paper game designer and gamemaster. My formal education was in geology and geophysics, and back in the day I worked in the oil industry tweaking software associated with finding oil. Since I left the oil industry, I've spent most of my time being a parent, but did have enough time to get two short stories published (in Analog and Marion Zimmer Bradley's Fantasy Magazine). Now I'm giving epublishing a try, and I have an ample supply of novel-length publishable material to polish and publish.

About the Series: 99 Gods

99 Gods are sent to Earth to end war, and end up causing havok.

I really enjoyed reading this. I loved the mix of fantasy and religion. The story was a fresh and unique perspective of religion and the supernatural.

You have subscribed to alerts for Randall Allen Farmer.

You have been added to Randall Allen Farmer's favorite list.

You can also sign-up to receive email notifications whenever Randall Allen Farmer releases a new book.