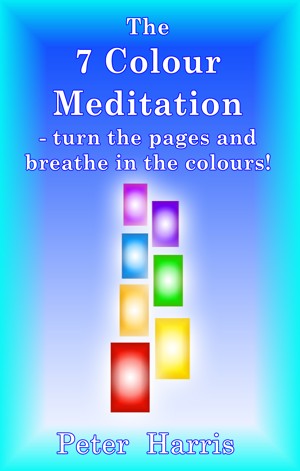 The 7 Colour Meditation - turn the pages and breathe in the colours!

I am sometimes known (by those who approve of wizards) as The Wizard of Eutopia. I live in The Story Ark, an old army barracks on the main road of Kaiwaka, &#39;The Little Town of Lights&#39; - blink and you miss it, only at night you can&#39;t because it has fairy lights everywhere. For twelve years I&#39;ve been building, also on the main road (well, a little to one side of it), a sculptured ferrocement &#39;folly&#39; called Café Eutopia.

What is Eutopia and why should you care? Well, it&#39;s an organic café, a temple to Love Beauty Truth and Freedom, and a bookshop - not necessarily in that order. See photos. For lots more, taken by tourists from all over the world, just enter &#39;Cafe Eutopia&#39; in Google images. The tourists love me; the locals keep asking, &#39;When&#39;s he going to finish the darned thing?&#39;

Unbeknown to them, for even more than those twelve years I&#39;ve also been building a much more ambitious, unseen &#39;folly&#39; - a fantasy epic named (in a dream after I failed to come up with a title) THE APPLES OF AEDEN. I&#39;ve also written a few other books, as you can see - fiction, non-fiction and some in between.

To release the writing from the computer screen (and beat the gatekeepers of traditional publishing)I started a digital printshop and developed a quick method of book-binding, and more recently, embossing and &#39;edge-carving&#39; antique-fantasy-style books (and, at the other end of the book spectrum, ebook uploading).

I spent much of my earlier life, like many of us in the troubled &#39;post-everything&#39; West, in an angsty quest for Truth (between enterprises intended to feed us but always threatening to consume us - spinning wheels, clocks, oval picture frames). A teen convert to radical Christianity, I thought I should become a Bible translator, so I got a BA in classical Hebrew and Greek. But in the process I &#39;lost my faith&#39; (quite rationally I think!)and became an angsty agnostic.

To feed a growing family, I tried to focus on the oval frames and sacrificed a few tormented years on the anvil of manufacturing, much of it in a cold, dickensian defunct woollen mills in Dunedin. Upon reading Zen and the Art of Motorcycle Maintenance I had an epiphany which saved our business.

But in 1990, just when we had paid off my father-in-law and even started to make some money, the rubberband of my soul (I felt) was stretched to breaking point, and I had to leave the workshops of the North where we had moved, and go to the City to study Philosophy at Auckland University. In 1995 I wrote (in a database), an infamous &#39;evolving&#39; MA thesis called &#39;Process and Inquiry&#39;. The professor rang me to say he had &#39;wondered whether I was an undiscovered genius,&#39; but after an outside examiner from Alberta (an expert on Aristotle no less) pooh-poohed it, he felt emboldened to say, &#39;But now, I don&#39;t think so.&#39; Ah, how good it is to be able to fall back on peers!

&#39;I have abandoned my quest for Truth, and am now looking for a good Fantasy&#39; (Ashleigh brilliant).
We left the City then, and to detox from the philosophy department I began Eutopia, &#39;singing outside the walls&#39; of academia. I was free at last - but (at least compared to the philosophy professors) broke.

As a Neoplatonist/Pagan free-thinker/Defender of the True West, I love inspiring others by what I create in buildings, artefacts and ideas. In the Story Ark I have started the New Leaf Network, a book-binding and self-publishing group. And in the old hall at the back of the Ark I am developing the School of Wisdom and Wizardry, based on the Tree of Life, the Flow Rainbow and the Wheel of Wisdom game. Also the Tree of Life &#39;wizard&#39;s staff&#39;, representing the power we actually all have, to &#39;ground&#39; at least a bit of heaven on a bit of earth - so creating &#39;Eutopias&#39; - Good places - wherever we may be.

PS: I met Raewyn Crisp in Greek 101, and we married the next year (so young!). Thirty-five years later we can say we have four (mostly) grown-up children. We think we may be almost there too! But they may differ with me on that. Raewyn too. She is a perennial student, and now the kids are grown, is back doing a post-grad psychology degree. She refuses to psychoanalise me, however - she&#39;s a behaviourist.

PPS: My main blog for general reflections, offerings and creations, is www.wizardgifts.wordpress.com

PPPS: Main influences: Tolkien (of course!) C.S.Lewis, Nietzsche, R.Pirsig, R.Bach, C.S.Peirce, J.M.Barrie... oh and Plato (how not?), Plotinus... So, if you wonder why read P.J.Harris, well, the compost of my mind has grown a garden with some trees which I think do sometimes sway in a wind from beyond the walls. Also, I know quite a bit about the walls themselves.

PPPPS: Zarathustra: &#39;O afternoon of my life! What have I not given away that I might possess one thing; this living plantation of my thoughts, and this dawn of my highest hope.&#39; What was his hope? Perhaps this quote comes close to the vision: &#39;I will make company with creators, with harvesters, with rejoicers: I will show them the Rainbow and the Stairway to the Overman.&#39;

Update 28th Oct 2012: I am now doing &#39;Fantastic Ferrocement&#39; gardens and sculptures as a &#39;contracting&#39; business, and hope to get back onto the cafe Eutopia building using the team I will build, and the money we scrape together doing the contracting. The adventure continues, in the abstract and the concrete!

You have subscribed to alerts for Peter Harris.

You have been added to Peter Harris's favorite list.

You can also sign-up to receive email notifications whenever Peter Harris releases a new book.