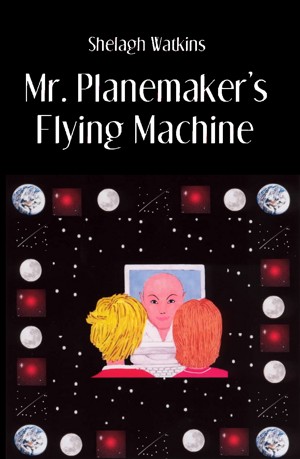 By Shelagh Watkins
Rated 5.00/5 based on 1 reviews
Dell and Emmelisa Planemaker, two ordinary children who lead uneventful lives in a small town in Lancashire, discover a unique computer that takes them on an extraordinary journey. Guided by a strange-looking man from a far-off distant planet, they undergo a tough space mission: to follow their father's TRAIL OF LIGHT. More
Mr. Planemaker's Flying Machine was serialised on Preston FM Community Radio in 2009.

The book is easy to read, full of fun and has a cracking last chapter.

From readers who enjoyed the book:

"This book is well-written and imaginative. Everyone needs it. Why? Because it is fun!"

"Anyone who has ever harboured a desire to become an astronaut ought to read this wonderful book and climb aboard the space mission."

"The story is spell-binding, compelling and magical. The plot is unusual, clever and well thought out."

"The story moves at a tremendous pace and the only problem the reader will experience is knowing how and when to put the book down before the amazing conclusion."

"... this is a refreshing and unusual kids' story which I, as a hard-nosed scientist -- albeit with magic as a hobby -- had to read to the end, and that it will likewise enthrall children readers and bed-time story tellers alike. So buy it, lie back, and enjoy it with, or even without the kids."
Download: epub mobi (Kindle) lrf more Online Reader
pdb
Price: Free! USD
Add to Library
Create Widget
Tags: fiction fantasy childrens book children books fantasy adventure children ebooks discounted ebooks fiction young adult childrens fiction fantasy books childrens fantasy
About Shelagh Watkins

Shelagh Watkins is writer, editor and publisher at Mandinam Press, a small press company set up in 2008. She is the author of two books: Mr. Planemaker’s Flying Machine, serialised on radio during May-July, 2009 (daily episodes on Preston FM’s Chat City with a weekly forty minute omnibus on Sundays), and The Power of Persuasion, which was on the list for Wales Book of the Year 2009.

Shelagh is also administrator of the Published Authors forum.

Mr. Planemaker's Flying Machine by Shelagh Watkins
Dell and Emmelisa Planemaker are two ordinary children who lead uneventful lives in a small town in Lancashire until they discover a unique computer that takes them on an extraordinary journey. They are guided by a strange-looking man from a far-off distant planet who helps them to undergo a tough space mission: to follow their father's Trail of Light.

Fantasy is deftly combined with realism in this tale of two children, Emmelisa and Dell Planemaker. Science and metaphysics blend together as Dell and Emmelisa deal with troubles ranging from the tragic loss of their father to the agony of coping with school bullies. They begin to find solutions to these real problems when they happen upon their father’s old computer, and, with the help of their mysterious family cat, Cosmos, find themselves magically transported into the computer’s inner workings. They have entered a magical city where the buildings have names like the Central Processing Unit and the Read Only Memory building, where they and their readers incidentally learn the various parts of an actual computer and how the interconnected parts work to make the computer function. They are guided by a strange-looking individual named A. Leon Spaceman, and meet several of his companions. Eventually, they embark on a journey into space and a quest for their father’s “trail of light.”

Mr. Planemaker’s Flying Machine by Shelagh Watkins is available through amazon.com and amazon.co.uk. Watkins’s extensive knowledge regarding computer technology and the science of space travel combine with her imaginative story-telling skill as she weaves the children’s adventures with a fascinating primer where young people can learn about science as they get caught up in the travels of Dell and Emmelisa.

The metaphysical element is explored through the dreams of Mr. Planemaker and his children, and it is often difficult to tell where that element ends and the scientific one begins. The sometimes harsh realities of the children’s lives are tempered by the thoughtful manner in which their story is told, as well as through the solutions they find on their quest. The action of the story holds up through the book’s very last pages and its surprising ending. While the book was written for children, adult readers will also find themselves caught up in its ageless story.

You have subscribed to alerts for Shelagh Watkins.

You have been added to Shelagh Watkins's favorite list.

You can also sign-up to receive email notifications whenever Shelagh Watkins releases a new book.