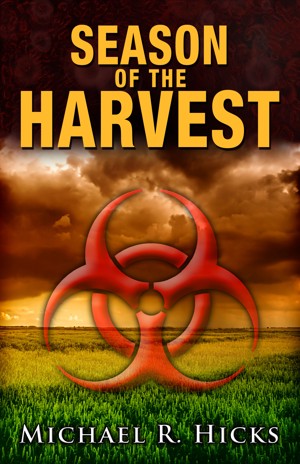 By Michael R. Hicks
Rated 4.50/5 based on 8 reviews
FBI Special Agent Jack Dawson investigates the gruesome murder of his best friend, who had been pursuing a group of eco-terrorists. The group’s leader is a beautiful geneticist who claims that a major international conglomerate developing genetically engineered crops is plotting a sinister transformation of our world that will lead humanity to extinction. More
At a genetics lab where a revolutionary strain of corn is being developed, FBI Special Agent Jack Dawson's best friend and fellow agent is brutally murdered, his body torn apart.

Jack is convinced that Naomi Perrault, a beautiful geneticist and suspected terrorist, is behind the murder. But when Jack is framed for setting off a bomb that devastates the FBI lab in Quantico, Naomi becomes Jack's only hope of survival.

Confronted by the terrifying truth of what the genetically engineered seeds stolen by his friend are truly for and who is really behind them, Jack joins Naomi in a desperate fight across half the globe to save humanity from extermination...
Download: epub mobi (Kindle) pdf more Online Reader
lrf pdb
Price: Free! USD
Add to Library
Create Widget
Tags: military adventure fbi thriller genetic mutations
About Michael R. Hicks

Reviews of Season Of The Harvest (Harvest Trilogy, Book 1) by Michael R. Hicks

All other reviews are correct about plot, characters, etc. No need to repeat. Additional thoughts:
-Is this book the source of the conspiracy theory that there are lizard people directing things in Washington lately?
-Reading about one of the conspirators getting sworn in was almost as scary as the 2017 inauguration. The politics in here made me rather uncomfortable, but then all politics does today.
-This book did a better job than most alien invasion stories at trying to find a motive for any alien to invade Earth.

In the present climate I'm afraid to write about anything that may make things worse in either direction. Micheal has taken a very sensitive issue and treated it as fairly as possible. His goal was obviously an exciting story, and this is that, but I think he did his best to keep politics and the culture wars out of it.

GMO as it is practiced by agribusiness today is not really about helping us raise more crops but about helping them sell more agricultural chemicals, that is misuse of this science. They should be developing crops that do not need chemicals.

Season of the Harvest grabs you quick and keeps the adrenaline pumping. It’s a fun read for some quick escapism. Some of the science and plot strain credulity; but overall, it’s well-written and worth your time.

Though this is the beginning of a series, the first book is a self-contained story, and I appreciate that a lot. Too many writers string out resolutions over the entire series, and it’s nice to have major plot elements concluded in one novel.

This book was not a complete waste of time and threw some kicks here and there but this is definitely not a five star book.

I REALLY enjoyed Season of the Harvest by Michael R. Hicks. It has an engrossing storyline that is quite relevant to events occurring all over the world(not going to spoil it), excellent character development, and is FULL of action and twists.
I can't wait to read the next 2 books in the series!

Do you like a book which grabs you by the seat of your pants and refuses to let you go? Season of the Harvest by Michael R. Hicks is just such a book. I hated putting this book down once I started reading. In fact I got completely caught up into the story and adventure.

The author did an excellent job of developing the storyline of this action packed adventure. Even with all the great twist and turns it was easy to keep up with the action. At times you will be holding your breath waiting for the next unexpected twist to occur.

If the next two books of the trilogy are as exciting as the first, look out.

I really enjoyed reading Season of the Harvest by Michael R. Hicks and I highly recommend this book to all readers.

I admit that I am already a Mike Hicks fan.
His In Her Name series of SciFi thrillers is great.
But this book is something different and fabulous.
It is a little hard to talk about it without revealing stuff that the reader will want to discover by themselves.
But let me say that if you like Michael Crichton - you will love this.
If you like Lee Child - you will probably also love this.
There are many other comparisons that I could make but the best advice is to purchase the book and read it for yourself. You will soon be back here writing your own review praising this work.
I have a some knowledge of a couple of the infrastuctures that are written about in this book and he hits them dead-on This is realism mixed with a current issue mixed with some "could-happen" and is exciting.