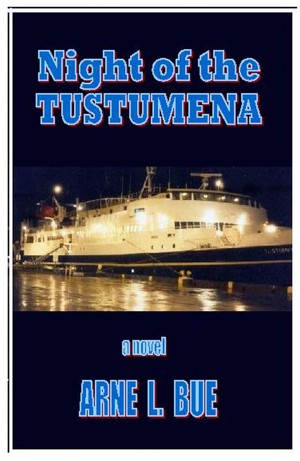 Night of the Tustumena

By Arne L. Bue
Rated 3.33/5 based on 3 reviews
In this illustrated tale of murder, the secretive creator of an Alaskan drug route encounters problems on his last voyage to Dutch Harbor aboard the Alaska State Ferry "Tustumena."

Arne Bue is a lifelong Alaskan, living in Anchorage, Alaska, with his wife, Shirley Bue, the author of Humble Snyder.
Arne Bue is the author of The Lid, Baxter Bog Interlude, Night of the Tustumena and Banto Carbon and the Prehistoric Proboscis.
http://home.gci.net/~bue/index.html

ARNE L. BUE talks about his Alaska thriller, Night of the Tustumena
The Author speaks of: how he nearly lost the manuscript due to a corrupted diskette; problems with character development and who came to his rescue; how the Alaska State Council on the Arts funded his voyage aboard the "Tustumena" to Dutch Harbor in the Aleutians in order to complete the novel; how the online blog site Editor Unleashed helped him refine the novel's opening chapters; and he speaks of the photographs taken on the voyage and incorporated into the novel itsel.

This is not really the sort of story I like to read, but was eventually glad I did. Mr. Bue does a commendable job of describing the chief character's gradual descent into a severe depression as he watches his world collapse around him. Trying desperately to maintain an aura of calm amid a tortured existence as the "perfect route" he has developed over several years comes unglued and falls apart, Mr. Nakano finally realizes that his problems are bigger than he is and tries to resolve them in an honorable way. Whether or not he succeeds will vary with the personal outlook of the reader.

Drugs are being smuggled into Alaska and the authorities believe someone from the ship, The Tustumena, which takes passengers to various ports along the coast, is being used.

Captain Sewell is put out when he and his crew are ordered to watch a particular frequent passenger, a Japanese man who keeps to himself while studying birds, taking pictures and doing his sketching. No way could this man be a drug runner.

Mr Kenso Nakano got sucked into a yakuza family as a young man; something he deeply regrets. For the yakuza he'd set up a perfect drug running operation only after years of no problems, his boss suddenly wants more drugs moved and creates a problem that puts the operation in jeopardy. His wife needs surgery and his son needs to go to college to avoid working for the yakuza, so he'll do one more trip to get the money he needs for his family.

This is currently only available as an ebook. To be printed it would need the help of a good editor. The story feels choppy as it combines 1st and 3rd person narratives. It's also not always immediately clear when a narrative moves from present to past memories and back again.

The author is good with descriptions--sometimes poetic--especially involving the ship and the various Alaskan ports. He also shows us the honorable side of a "bad man" who uses the teachings of Buddhism for himself as well as to help some of the crew. While I never really felt much for any of the characters, this aspect made Nakano somewhat more interesting.

Just finished reading Arne's thrilling tale. I thoroughly enjoyed the read! He weaves a great tale with a lot of backstory and very believable characters. I would reccomend this book very highly.

You have subscribed to alerts for Arne L. Bue.

You have been added to Arne L. Bue's favorite list.

You can also sign-up to receive email notifications whenever Arne L. Bue releases a new book.