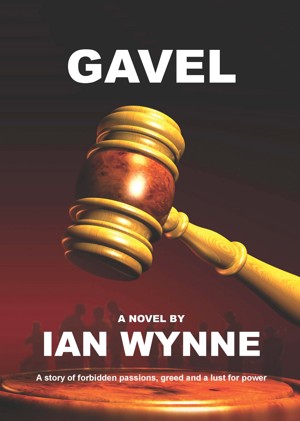 By Ian Wynne
Rated 5.00/5 based on 3 reviews
Wildlife photographer Andrew Pringle stumbles into a world of corruption and violence as he tries to make sense of his brother's murder. Gavel is a story about forbidden passions, entrapment and a lust for power at the highest levels of Australian society. More
Gavel is a story about forbidden passions, greed and a lust for power.
Andrew Pringle's twin brother has always been on the fast track to success but now he's in trouble. The wildlife photographer from South Africa owes his twin an lot and is determined to pay his debt. But when his brother is murdered shortly after Andrew arrives in Australia he finds himself at loggerheads with the police investigating the case. Determined to find out what sort of trouble his brother was in, Andrew discovers that the twin he's always admired had a dark secret that has been exploited by a crime network with tentacles throughout the police and judiciary. As they search for the cause of his brother's death, Andrew and his newfound girlfriend become targets of an organisation so powerful that it can kill and torture at will.

Ian Wynne has worked as a journalist, magazine editor and publications manager. He was a news reporter in South Africa under anti-apartheid newspaper editor Donald Woods (who was featured in the movie Cry Freedom). He became a news editor then magazine deputy editor before emigrating to Australia, where he has worked in journalism, in public relations, as publications manager of a large university and later as publications manager at Amnesty International Australia. He was also editor of their Human Rights Defender magazine. Ian currently writes fiction and has written five novels and a book of short stories. His first novel, The Pawn was set in South Africa during the apartheid era and won third prize in Australia's largest fiction competition. It was first published by Random House in 1989. Shadow by my side was published by Zeus Publishing in 2008, Gavel and The Seventh Vial have subsequently been published (along with his other works) online with Smashwords. His latest novel is due for release shortly.

Review
joy2be reviewed on July 25, 2011
(no rating)
I read 'Gavel' with great interest. The suspense novel casts light on sensitive subject matter and makes it feel real for the reader.

(reviewed 37 days after purchase)
Allan Richardson reviewed on July 13, 2011
(no rating)
Excellent work! Very tight writing, suspenseful and a great plot. Ian's best novel yet. It is always enjoyable to be taken to a familiar place, geographically.

(reviewed 22 days after purchase)
Helen Bowers reviewed on July 7, 2011
(no rating)
Gavel is a great read, a fast-moving thriller, intricately but believably plotted, with some memorable characters and a satisfying ending. For me there was the added pleasure of a well known setting.
HelenB

I could not put this book down - excellent, exciting plot. The pace is fast and realistic.

This is the first e-book I have read on my Iphone and I loved the whole experience.

A roller coaster ride with some unexpected twists and turns. A well thought out plot that is complex yet easy to follow. A thriller of high calibre.

With one simple sentence, Ian Wynne launches the reader on a top-speed ride through the highest levels of power with more twists, turns and nerve-pricking surprises than a World Rally Championship contender on the death roads of Bolivia.

Mr Wynne has taken the foundation of Australian democracy, the Westminster System, and given it a solid shake.

He has taken the three elements of democracy -- the politicians, the judiciary and the police -- and melded them into a maze of corruption, of lies and deceit, of power-broking, paedophilia, torture and murder at their foulest.

Then, in a master stroke, he brings in the fourth element, the only guardian any democracy has in ensuring the separation of powers and the true freedom of the people, the Fourth Estate, the media.

It is a fast-paced story that will hold the readers and keep them turning the pages when they should have turned the lights out hours earlier.

It will also have them rethinking political and corporate announcements of recent years, the ones that were strangely at odds with what would have seemed the logical decisions and outcomes at the time.

Because Mr Wynne's tale is all the more frightening for its plausibility. It could happen. It could be happening now.

Ian Wynne is emerging as a story-teller of world ranking. This is his best work yet.

You have subscribed to alerts for Ian Wynne.

You have been added to Ian Wynne's favorite list.

You can also sign-up to receive email notifications whenever Ian Wynne releases a new book.