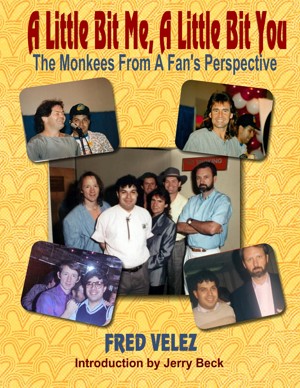 Fred Velez, known for over 40 years as a Monkees super-fan; as the Master of Ceremonies for the Monkees Conventions; Writer for the Monkee Business Fanzine; and Blog Writer for the Monkees.net, takes the reader on a fascinating journey as he follows the group from its earliest days. Fred, through his experiences, pictures and memorabilia, tells the tale of the Monkees. He writes about the TV show, the music, the concert tours, the different career paths the members of the group took, and the effect the untimely death of Davy Jones in 2012 had on the fans. Fred was one of the privileged few who went from being a kid sitting on the floor in the living room watching his favorite TV show, to an adult, sitting in Davy Jones living room as he helped Davy work on a book. Also included are the stories of other fans and how they too, had very personal involvement with the boys in the band, whether they were sitting in the audience, or up on the stage sharing the spotlight. This book is a heartfelt tribute from the fans to Micky, Davy, Peter and Mike. Fred Velez shares never before seen pictures of The Monkees in various venues, stories that will make you laugh, and personal recollections of fans who had their lives touched by this amazing music group. Fred also adds to the story by highlighting the decades with historical events and his interactions with other music greats, like John Lennon, Ringo Star, Paul McCartney, the Ramones, KISS, and, Jersey's own, Uncle Floyd.

Jerry Beck, well known Animation Historian and another big Monkees fan, writes in his introduction to the book, "I'm grateful to Fred for making it possible for me to wave my Monkee freak flag high. Fred is one great guy-and a true believer to the end. His book and experiences with Monkee fandom and the Monkees themselves make a great story and tell the tale from another perspective. The Fan's perspective...I hope they will read and enjoy Fred's story-as it speaks for all of us who have ever felt that art transcends a single viewing, and how it touches our lives in such a positive way."

Born in New York City, Fred Velez writes a Blog for the Monkees.net website and was a writer for Maggie Manus’ Monkee Business Fanzine, and co-wrote with animation historian Jerry Beck the article ‘Critic’s Choice: The Monkees’ for Video Review Magazine, 1984. Book credits include contributions to ‘The Monkees: A Manufactured Image’ by Ed Reilly, Maggie McManus and William Chadwick and ‘Mutant Monkees Meet The Masters Of The Multimedia Manipulation Machine!’ by Davy Jones and Alan Green. Fred has been the master of ceremonies for the Monkees Conventions from 1980 to 1989 and 2013/2014. As an actor Fred has performed in many productions including ‘Godspell’, ‘Damn Yankees!’, ‘Oklahoma!’, ‘Uncle Vanya’, ‘A Mid Summer’s Night Dream’, ‘Twelfe Night’, ‘A Christmas Carol’, ‘A Night In Elsinore’, ‘Beauty & The Beast’, ‘Oliver!’ and the films ‘When Nature Calls’, ‘A Price Above Rubies’, ‘Salt’, ‘Man On A Ledge’ and was a writer and cast member on the Uncle Floyd TV show.

You have subscribed to alerts for Fred Velez.

You have been added to Fred Velez's favorite list.

You can also sign-up to receive email notifications whenever Fred Velez releases a new book.