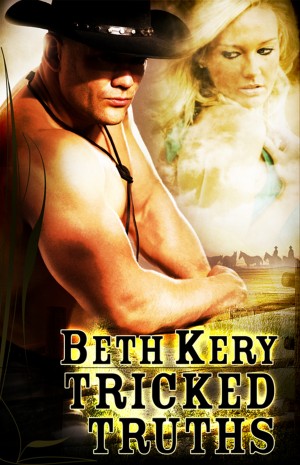 5 Blue Ribbons from Romance Junkies "TRICKED TRUTHS is a prime example of Beth Kery's exceptional writing abilities. The story drew me in and I couldn't put it down until I had read the final word. Trick and Grace are both wounded souls in need of healing. They must overcome their past history before they can move on with their lives. The secrets Grace has carried for over twelve years are deliciously shocking. Believe me, this unlikely couple's journey of discovery is one you don't want to miss. Grab a copy of this fantastic book at your earliest opportunity."

New York Times and USA Today bestselling author Beth Kery loves reading, writing and collecting books. Her books have been translated into eleven languages worldwide. Find out more about Beth and her writing at www.BethKery.com or follow her on twitter, www.twitter.com/BethKery or facebook.com/beth.kery.

I find it hard to believe Grace would put up with half of what Trick puts her through. Still, I've read far worse books in this genre. The ending is very rushed.

My review from Goodreads listed below:

I don’t usually clarify my star rating but I felt I needed to with this story. I rated it a 2.5 in my head but gave it 3 stars in Goodreads. That extra nudge was simply because it’s a Beth Kery story. I almost always enjoy her stories to a varying degree, from good to very good except this story. Oh...and except Velvet Cataclysm which I didn’t like at all. Her writing style in this book is a bit like poetry in the way she uses her words. Okay maybe not poetry but I don’t know the word to describe it so here is an example. “The amount of incendiary material he’d built up for Grace must have been monumental.” See what I mean? The whole story is written like this, different.

Now on to my thoughts about this story.

First off Grace is NOT Trick’s mother-in-law. She was married to Trick’s father Evan, so she is his stepmother! Grace is described as his mother-in-law in the Goodreads synopsis and also several times in the story, talk about confusing and not a good start to this book. This story did get a bit better as it unfolded and the characters took shape for me.

Trick was an asshat to Grace from the word go. Grace was a strong, assertive woman with everyone but…Trick. For the most part, Grace was Tricks whippy post, figuratively speaking that is—and she let him. That’s the part I disliked most, her hypnotic like acceptance of his treatment. I understood it sure and it was explained at the end but I don’t have to like it though.

Then there was the mad dash to the end of the story where explanations’ and secrets were revealed. The ending was just too rushed for me. I needed more closure

Loved this book! It was intense (similar in some aspects to Come to Me Freely). There is a HEA, but you don't always see it coming. Please write more Beth!!!

You have subscribed to alerts for Beth Kery.

You have been added to Beth Kery's favorite list.

You can also sign-up to receive email notifications whenever Beth Kery releases a new book.