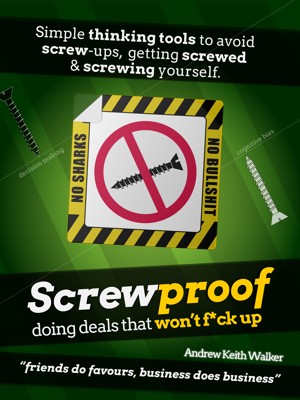 A laugh-out-loud funny, plain speaking guide to using simple thinking tools to make better decisions and negotiate better deals. It explains 5 simple rules that will stop you from getting screwed. It's been read by bankers, investors, civil servants, psychologists, entrepreneurs... it's for anyone who needs to think creatively, think fast and wants to negotiate better. Go screwproof yourself. More
Do you think you're rational? Are the decisions you make logical? How do you know? Have you ever looked back on decisions you've made and wished you had chosen differently? Probably. Everyone does sometimes, right?

The problem is our rational minds are affected by our emotions, our physical state and a whole bunch of social pressures. These unconscious parts of our mind can make us choose badly. It creates a bad decision making process, sometimes referred to as 'confirmation bias'. In life, it causes arguments, in business, it gets you screwed.

The other problem is, books about it can be pretty dull. Except this one, which is full of funny stories and bad language, just like the real world.

Screwproof is a laugh-out-loud funny, plain speaking guide to using simple thinking tools to help you make better decisions and negotiate better deals. It explains 5 simple rules that will stop you from getting screwed. It's got useful thinking tools like 'The Sandwich Guy test' and 'The Bad Waiter test' to help predict how well you'll get along with someone you're trying to make a deal with.

Screwproof is a way of thinking that makes sure your choices are coming from your rational brain, not emotions or social peer pressure making choices for you, written by entrepreneur and tech startup veteran Andrew Walker, based on all the deals he's screwed-up over the last 20 years.

It's been read by bankers, investors, civil servants, psychologists, entrepreneurs, geeks... it's even got people thrown out of quiet coaches on trains for laughing. It's useful for anyone who has to make deals, especially if they've got to think creatively and fast.

Don't get screwed, get screwproofed.

Andrew Keith Walker was born in 1971, and grew-up in a seaside town on the south coast of England. After being told that he could either work in a hotel, an insurance company or a bank by his careers teacher, he attended Edinburgh University to do a degree in Politics - which his teachers and many of the people he grew up with thought was proof that Andrew was basically an ungrateful socialist troublemaker (people thought like that in the 1980s). He graduated with an MA (Hons) and realised he didn't want a job, so he took a part time nightshift job at The Scotsman newspaper and was a stand-up comic on the Edinburgh comedy scene.

In 1995, his mother suggested he get a job working on the internet because "It's for people who can't decide what they want to do with their lives and don't like fitting in".

She was right (thanks Mum, AKW). Andrew started a post-graduate MSc in Multimedia Technology where he ignored the boring coursework and made games for web pages, but couldn't complete it because he had a row with his MSc tutor who refused to mark his dissertation proposal on internet games, laughing at the idea that it could ever catch on, saying "The internet is just for academics, nobody will ever play games on it, you've been watching too much Star Trek!"

Fortunately, his tutor was wrong about the internet and Andrew walked out and got a job, that same day, making internet games at Cyberia, the UK's first chain of internet cafés. His tutor was right about the fact Andrew watched too much Star Trek, however.

Since then Andrew has done many jobs as a graphic designer, copywriter and web developer in the grim world of advertising and marketing agencies. In 1998 he started his own successful creative agency (Thin Martian), more recently he's been an early stage investor and MD of a data mining start-up (Semetric / MusicMetric), been a partner in a social media product placement company (Social Placement) and co-founded social media news feed company Tweetminster / Electionista.

He was the first person to interview a UK political party leader with a live Twitter Q&A, the first person to interview a serving UK Prime Minister on Twitter, he's written and created ad campaigns (some you might have seen), designed logos, developed data powered news products, built websites, helped set-up the Child Exploitation and Online Protection Centre (CEOP), helped the BBC monitor elections, the social media rent-a-pundit on the TV and Radio news, written articles and features in newspapers and magazines and is a regular speaker at conferences around the world, talking about the changing worlds of technology, business and digital culture.

His greatest achievement is generally proving that your parents and teachers really don't have a clue what they're talking about when they assume, because you wear dungarees covered in political slogan badges and smoke a bit of weed down the beach with your buddies at the age of eighteen, you're basically somewhere between Shaggy off Scooby Doo and Carlos the Jackal.

He's closed deals with big brands (like Hewlett Packard, Nokia, Vodafone, and Xbox); public institutions (like The Commonwealth, Hansard and the UK Parliament); charities (like the NSPCC, The Diana Memorial Fund and Oxfam); publishers and media organisations (Nastycorp, The Independent, The Guardian, BBC, BSkyB); angel investors, venture capitalists and start-ups... his view of deals and the complex social interactions that come with them comes from experience of success and, in all fairness, screwing plenty of stuff up along the way.

He has to his credit award winning projects, industry firsts and also been laughed out of people's offices for having wacky ideas that would never work, until they either worked... or didn't.

Andrew now lives in rural Suffolk, with his wife and children, a hamster, a chicken, a couple of fish tanks and a cat called Rusty that isn't his but comes to visit all the time.

Other lives: Andrew is also a 3D printing artist in his spare time. He plays a mean slide guitar, makes comedy podcasts and writes fiction under another name...

You have subscribed to alerts for Andrew Walker.

You have been added to Andrew Walker's favorite list.

You can also sign-up to receive email notifications whenever Andrew Walker releases a new book.