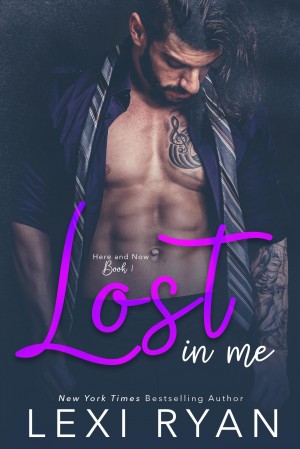 By Lexi Ryan
Rated 3.50/5 based on 2 reviews
When an injury leaves Hanna Thompson without her last year of memories, her life seems perfect—right down to an engagement ring from Max Hallowell, her life-long crush. Does she have the life she always wanted or is it a façade propped up by secrets she doesn’t know she has? She needs answers, but the only person who has them is Nate Crane, the sexy rocker who wants her for himself. More
Lost in Me is the first book in the Here and Now series, a spin-off of the New York Times and USA Today bestselling New Hope series. This sexy amnesia love triangle is intended for mature readers.

The last thing I remember is having drinks at Brady’s and trying to avoid eye-contact with my life-long crush—the gorgeous, unattainable Maximilian Hallowell. They tell me that was a year ago, but I have no memories of anything since then. What I do have is this ring on my finger that Max says he gave me, and this much-thinner body I’ve dreamed of most of my life. Aside from a case of retrograde amnesia, everything seems almost...perfect.

But the deeper I immerse myself into this new world of mine—planning a wedding to a man I don't remember dating, attempting to run a business I don't remember starting—the clearer it becomes that nothing is as it seems. Do I have the life I’ve always wanted or is it a facade propped up by secrets I don't even know I have?

I need answers before I marry Max, and the only person who seems to have them is the angry, tatted, sexy-as-sin rocker Nate Crane. And Nate wants me for himself.

Lost in Me is not a standalone novel, as the story continues in Here and Now book two, Fall to You, available now, and concludes in All for This, available August 4th.

Here and Now, A New Hope Series:
Lost in Me
Fall to You
All for This (coming August 2014)

New York Times and USA Today bestselling romance author Lexi Ryan’s novels have been described as intense, emotional, and wickedly sexy. A former college professor, she now writes full-time from her home in Indiana, where she lives with her husband, two children, and a neurotic dog. Find her on Facebook or Twitter to chat about books, TV, and her children’s latest antics.

Also in Series: Here and Now

I had a good time reading all 3 books

When Hanna wakes up in a hospital bed, she has no idea how she got there. But what's even stranger is that she seems to have awakened in some dream world, where everything she's ever wanted has come true. She has her mother's approval, a sparkly ring on her finger, a flat stomach, her dream business, and the man she's been crushing on since she first discovered boys. But she doesn't remember a diet, a proposal, even a date with Max before he showed up as the doting fiance. In fact, she remembers nothing of almost a year of her life. And she certainly doesn't remember the tattooed musician who appears in her bed a few days later.

But: If you hate cliffhangers as much as I do, don't even think of reading this book before you have all three books in the series in hand. While at least some of the mystery is resolved by the end of the book through recovered memories and conversations, everything of substance is left up in the air in the worst possible way.

The Verdict: Wow. I thought I knew what I was getting into here. A book about someone who has amnesia is supposed to be pretty standard, very predictable. There's going to be some plot twist revealed just as some couple starts coming together, and the recovered memories are going to bring to light some dark secret that I'll have already figured out, thanks to heavy-handed foreshadowing and obvious clues. But not so with Lost in Me. Not at all.

The last thing Hanna remembers before the apparent fall down the stairs that zapped her memories is being the overweight girl who wanted the unattainable guy. But according to her doctor and everyone else, that was almost a year ago, and it seems that her whole life has changed since then. She's lost tons of weight, and the guy wasn't so unattainable after all. In fact, he's practically perfect in his adoration of her, and while she may not remember how their relationship came about, she can see in his eyes just how real it all is. But there's a bit of a mystery as well, something stranger than just not being able to remember.

For one, she and Max have apparently never slept together, and even though he says it's because she wanted to wait until they were married, she can't imagine herself having ever made that decision. And then when she wakes up to a man who she thinks is Max, only to find out he's a complete stranger who clearly knows her body way too well… Well, like anyone else would in her shoes, she completely freaks out. Does this mean she was cheating on Max? Were they broken up? And why is this guy saying he's in love with her?

As the mystery of pretty much everything continued to unfold, I couldn't seem to guess correctly. I thought perhaps Max wasn't such a good guy, but then it looked like he didn't have a bad bone in his body. I thought perhaps Nate was the one for her, but then it became clear that he never made her any promises of a real relationship. There's an eating disorder, a doctor concerned that her fall wasn't a fall at all, friends she doesn't even remember, and a strange strain in her relationship with her sister.

And then there was a cliffhanger from hell. By that point, I knew not everything would be resolved, and that book 2 would be an actual continuation, not just another added story. And while against all clues, I did manage to guess the cliffhanger before I got to it, I still wasn't prepared for the story to end on such an unfinished note. I'll give Lost In Me credit for saying to hell with all the cliches and creating a truly interesting story about someone suffering from amnesia, but the cliffhanger really killed off some of my love for it. Part of me wants to snatch up the next book right this second, and part of me wants to find a different series to get into, at least until I've scrounged up the money to buy Book 3 — it's cheap, but I'm cheaper.

I think anyone who reads my reviews here knows that I do love to get lost in a series, but I hate feeling like I've been tricked into it. In any case, I imagine I'll finish off the series eventually. For now, though, I'm willing to bet that book 2 has a screwy ending as well, so I'm not gonna chance it before I have the last one lined up as well. While we're at it, Lexi Ryan is a new author for me, so if you've read her other stuff, I have to ask… Do all her series go all cliffhangery (

You have subscribed to alerts for Lexi Ryan.

You have been added to Lexi Ryan's favorite list.

You can also sign-up to receive email notifications whenever Lexi Ryan releases a new book.