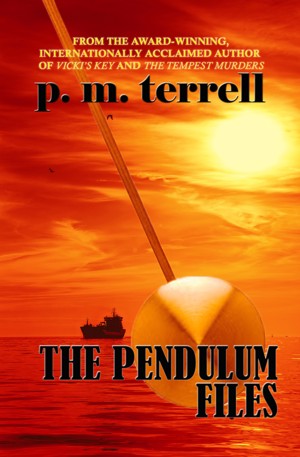 Reviews of The Pendulum Files by P.M. Terrell

The beginning of The Pendulum Files by P M Terrell slapped me awake!

Dylan’s Song was soooo good, I just had to jump right into The Pendulum Files by P M Terrell and it began with a sense of foreboding and danger that more than met my expectations. Reeled me in, hook, line and sinker.

Each book can stand alone, with recurring characters and occasionally a new one added. They have become my family and I don’t want you to miss anything, so I do recommend beginning at the beginning. I believe, once you start, you won’t want to stop.

The story will take us back to WWII and the lost riches of the Germans.

Oops, they missed that one and I wonder what will bite them in the ass because of it. OH NO! We take a terrible twist and Vicki becomes a primary target.

Brenda may be a second tier character, but I love her. She is a badass, take no prisoner type of gal, tough as nails. She will not stand still and let HIM take her out. She has her issues, has crossed the line and back again, but no one can accuse her of sitting idly by and letting life happen to her. She would fight on her own terms.

She brought Christopher to life. She is wild, passionate, unpredictable, and there is nothing he won’t do for her.

In Chris’ apartment…Gabucci…Brenda…the balcony…the fall…OMG! I fought along with Christopher…I was terrified for Brenda…OMG…I don’t believe it. P M, what are you doing to them. The author is not afraid to put her characters through the ringer, and make me wonder who will be left standing in the end.

The pendulum haunts Vicki. She is the only one to hear it. What does it mean?

Dylan has some of the craziest, funniest, ridiculous superstitions and insists, “It’s true.” I smile and shake my head at each and every one. Now, that’s some great writing P.

The political machinations read as if they are current events and, of course, there is misconduct, conspiracy, maybe even treason.

Even though the bombing of the ships mystery is solved, the story is far from over. What this family will face in the next dangerous adventure I can only guess, and I am eager to find out. Sooo, I eagerly being reading Cloak and Mirrors.

I voluntarily reviewed a free copy of The Pendulum Files by P M Terrell.