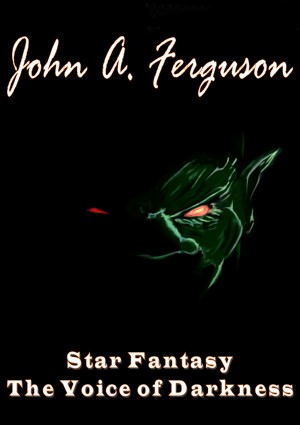 Star Fantasy: The Voice of Darkness

By John A. Ferguson
The war is being lost and soon the Goblins will return to enslave the planet they were once banished from. However, not all is as it seems.
Woken from a three thousand year sleep, the Wizard Bal'khan must track down the sole descendant of the Warrior Tribe - an ancient group of magical warriors who once freed the planet Eltheran from the clutches of the Overlords. More
The war is being lost and soon the Goblins will return to enslave the planet they were once banished from.
Guided by a dark and sinister voice which has invaded his mind, the Goblin King has united his people and brought a vicious war to the galaxy, all in an attempt to regain the planet they were once banished from. They form an alliance with a group of space dwelling half-castes to create an unstoppable force.
Meanwhile, on the planet Eltheran, a powerful wizard has been woken from his 3,000 year sleep into a very different world that he barely recognises. Magic has been replaced by the advancing technology of a world under threat from the Goblin invasion. Sensing there is more to the war than just an act of revenge the mysterious wizard Sebastian seeks out the surviving bloodline of the Warrior Tribe, a group of magical warriors he once created several millennia ago. He finds the last surviving member of the 'Tribe' as the Captain of the Imperial Flagship.
Captain Karel Ulrich, unaware of his magical heritage, is forced to take Sebastian onboard as a special advisor on a mission to a planet far beyond Imperial Space. The voyage takes them through a region of space dominated by Necromancer wizards, who draw their magic from the dead, and deep into the heart of Goblin territory.
On their journey Karel has to deal with the mysterious wizard's private agenda; his wife suffering from debilitating visions of the future; a Necromancer dying from a magical disease and still fight the war which he learns is routed to a legend from 3,000 years in the past.
The Overlords are returning to bring the next Age of Darkness.
Star Fantasy: The Voice of Darkness.
Available ebook formats: epub mobi pdf rtf lrf pdb txt html
First 10% Sample: epub mobi (Kindle) lrf more Online Reader
pdb
Price: $0.99 USD
Buy Add to Library Give as a Gift
How gifting works
Create Widget
Tags: warrior elf dwarf space adventure galaxy spaceship goblin space action goblin king space action adventure space action sci fi elf adventure
About John A. Ferguson

I grew up in Coatbridge, Scotland, and after my six years at High School I attended Glasgow University studying Chemistry with Medicinal Chemistry. Having graduated with an M.Sci (Hons) degree, I continued my studies and gained my teaching qualification. As a newly qualified teacher I returned to my hometown and taught Chemistry in one of the local high schools. With a proven track record in teaching I was accepted as a full member of the Royal Society of Chemistry and entitled to use the designatory Letters 'MRSC'.

During my time at University I met the woman who I would later marry. After the wedding I moved away from Coatbridge and now live, with my wife, in the West End of Glasgow.

Although I have dabbled in short stories my first main work of fiction started in my sixth year of high school. It was an ambitious project and at that time I lacked the skill to see it through to completion. About a year later I returned to the project. I used the work, which I had already completed, as a back story to my first Novel - Star Fantasy: The Voice of Darkness.

Between novels I write screenplays, comic scripts and short stories.

So the Saga continues...

Learn more about John A. Ferguson

You have subscribed to alerts for John A. Ferguson.

You have been added to John A. Ferguson's favorite list.

You can also sign-up to receive email notifications whenever John A. Ferguson releases a new book.