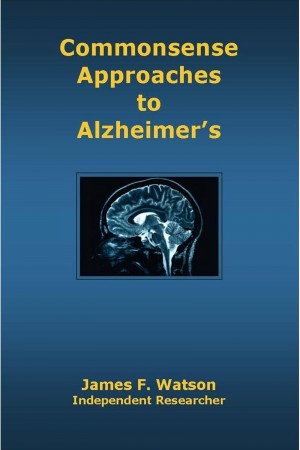 By James F. Watson
This is a book of commonsense approaches to Alzheimer's developed and refined over the years by the author. He had the guts and foresight to use these techniques to reverse his wife's Alzheimer's Disease sysmptoms. On these pages you'll learn how AD can be prevented, how to reverse AD in its early stages, and even how to slow AD down and provide better quality of life for the victims of AD.

James F. Watson is unique in the world of Alzheimer’s research. When his wife Sandy began exhibiting symptoms of Alzheimer’s Disease, he devoted his life to discovering – for himself, independently of mainstream AD research – the many causes of AD.
During several years of intense effort, Watson began applying what he had discovered toward the goal of reversing Sandy’s AD symptoms.
Upon achieving that incredible goal, Watson felt he must share his findings with others. Commonsense Approaches to Alzheimer’s was birthed.

You have subscribed to alerts for James F. Watson.

You have been added to James F. Watson's favorite list.

You can also sign-up to receive email notifications whenever James F. Watson releases a new book.