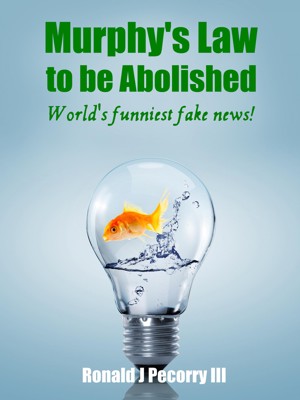 Murphy’s Law to be Abolished!

"Murphy’s Law to be Abolished!" is a collection of short smart satirical pieces from the widely respected and award winning website "SatireandComment.com." Support free speech and enjoy satirical gems on politics and culture that will make you laugh once but think twice. Covers US politics and race relations, political and cultural attitudes from India to Ireland to the Middle East and Australia More
"Murphy’s Law to be Abolished!" is a collection of the world's funniest fake satire news stories from the long established and award winning website "Satire and Comment". Highlights include the story of a lucky British atheist who saw an image of the big bang in a slice of toast, Glenn Beck's fears that whites will be rounded up into concentration camps called suburbs and Australia's election of Skippy the bush kangaroo. Casey Anthony's plan to publish a better parenting book and then go work for Newscorp is featured along with the surprising news that US Supreme Court justices will end the death penalty to stop those endless last minute appeals which keep interfering with poker night. Over in Europe, we learn about a new law to force taciturn Swedes to talk to one another, discover the horrified reaction of Italians when an opera ended before the fat lady sang, and read about the EU investigation into the Parker brother’s monopoly on the board game Monopoly. Israeli views on the peace process are skewered as are US politics and race relations - no cow is too sacred to be slayed in this series of short gems to make you laugh once and think twice.
Available ebook formats: epub mobi pdf rtf lrf pdb txt html
First 30% Sample: epub mobi (Kindle) lrf more Online Reader
pdb
Price: $0.99 USD
Buy Add to Library Give as a Gift
How gifting works
Create Widget
Tags: satire spoof fake news satire humour humor and irony news fiction satire humor news satire news humor satire and politics humorous satire
About Ronald J Pecorry III

Well, hi there! I'm Ronald Pecorry. I write satire and parody at the award winning and very popular website www.satireandcomment.com. The site has hundreds of satirical articles, poems and cartoons skewering political and social issues from every corner of the world. The lead off piece in the book is “Atheist sees image of big bang in toast” which is an internet sensation with hundreds of thousands of views. I burst out laughing when I came up with the idea and am proud to have written it given the reaction people have to it. As a writer, it is very validating to see the joy this story brings to so many people.

My piece on how Glenn Beck warns “whites to be rounded up into concentration camps called suburbs” is also very popular as is the plan for a “Casey Anthony better parenting book” . The opposition to plans by “Muslims to build a Mosque in the middle of nowhere” is another web hit.

If you honor me with a purchase you will you find yourself having different emotional reactions to different stories. You may relish in the visceral contempt expressed in some pieces or feel a strong sense of historical tragedy in others. “Virginia revives slavery” was written in reaction to a plan in Virginia to have a confederate history month and “White couple accidentally visit the MLK memorial in Atlanta” is my response to visiting that memorial myself.

But social commentary aside, you will smile at the gentle humor in “Dr. Pepper arrested for possession of Coke,” and chuckle at how “Skippy the Bush kangaroo got elected in Australia” or laugh out loud when you read “Murphy’s Law will be abolished” in Ireland. There are also offbeat pieces such as one which addresses what would happen if an “Opera ends before the Fat lady sings,” or details the “Atlanta woman who secretly loves PBS pledge marathons.”

Laugh once but think twice, as you absorb the ideas expressed in these little gems.

More seriously, I have always been committed to the idea that the pen is mightier than the sword and have unswerving commitment to the ideal of free speech which I believe to be the right that most sustains liberty. I believe free speech must be exercised and ideas must be challenged to stop a society from becoming stagnant or dictatorial.

The zany story behind my writing goes like this.

I am the Director of the think-tank originally known as the Atlanta Center for Policy Analysis, later "The ACPA." We were originally founded in New Orleans by my Great-Grandfather, and no-one has ever being able to find out why he called it the Atlanta Center. After repeatedly being asked, he simply changed the name to “The ACPA.” Over the years, as I tried to find the answer, I learned to my great surprise that the ACPA was in fact a figment of the imagination, a tingling on the sensory ganglia on the laughter nerve, just below thought. That was a shock to me, I can tell you.

Originally a bricks-and-mortar organization, we lost all our think-tanks, software and our Internet in Hurricane Katrina. We had recently upgraded from steel think-tanks to modern fiberglass tanks. Because of their light weight and portability, each researcher had their own individual tank, which was far more conducive to thinking than the old steel tanks. When the Hurricane hit, we were lucky that these tanks floated so well that our staff were able to drift out of the building on the flood and get to safety.

However, homeless locals seized all the abandoned tanks for shelter as they waited for Federal Aid. It would not have mattered anyway as our headquarters building was destroyed in the deluge. Our extensive Internet was also devastated, getting entangled in multiple objects and finally being seized by some fisherman who used it to fish at Lake Pontchartrain. We did not have the heart to ask them to return it, as they seemed so hungry, what with the Federal Aid continuing to be held up. Our software was also completely soaked and never dried out properly. So now we exist solely on-line until we sell enough eBooks to get a new building. You can help by buying a copy and buying another for a friend!

Reviews of Murphy’s Law to be Abolished! by Ronald J Pecorry III

You have subscribed to alerts for Ronald J Pecorry III.

Would you like to favorite Ronald J Pecorry III?

You have been added to Ronald J Pecorry III's favorite list.