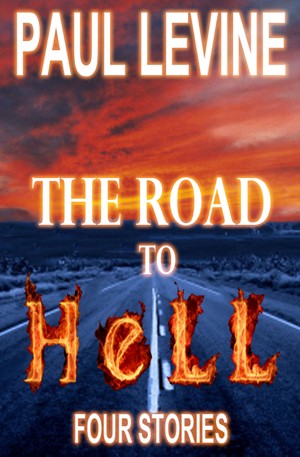 The Road to Hell

By Paul Levine
“The Road to Hell” collects four stories by Paul Levine, the Edgar-nominated author of the bestselling Jake Lassiter series.

The stories include “El Valiente en el Infierno,” (The Brave One in Hell), "Development Hell," "A Hell of a Crime," and "Solomon and Lord: To Hell and Back."

Plus there are two free excerpts from the novels "Solomon vs. Lord" and "Mortal Sin." More
“The Road to Hell” collects four stories by Paul Levine, the Edgar-nominated author of the bestselling Jake Lassiter series. Levine's heroes travel dark and dangerous paths as they confront devilish and powerful villains.

In “El Valiente en el Infierno,” (The Brave One in Hell), a 13-year-old Mexican boy tells his own story as he makes a treacherous midnight crossing into California in search of his father. The boy’s courage is tested when he runs into two gun-toting American vigilantes.

“Development Hell” imagines a pitch session in which a bedraggled Edgar Allan Poe squares off with a slick Hollywood producer who wants to make a cheesy slasher flick out of “The Pit and the Pendulum.” Bookgasm praised the story as “going straight to the funny bone.”

In “A Hell of a Crime,” a prosecutor prepares for a homicide trial while being pestered by his domineering mother, a famous lawyer herself. Just what role did she play in the murder? And how is the prosecutor’s enigmatic wife involved in the case?

Two of the author’s best-loved characters, Steve Solomon and Victoria Lord, appear in “Solomon & Lord: To Hell and Back.” The ethically-challenged Steve Solomon and the very proper Victoria Lord are mismatched Miami law partners. Steve says he's going fishing with Manuel Cruz, a sleazy con man. Victoria knows that Cruz is an unlikely fishing buddy. So just what is Steve up to now? Something between mischief and murder.

The "Solomon and Lord" novels have been nominated for the Edgar, Macavity and International Thriller Awards, as well as the James Thurber Humor Prize. “Remarkably fresh and original with characters you can't help loving and sparkling dialogue that echoes the Hepburn-Tracy screwball comedies. A hilarious, touching and entertaining twist on the legal thriller." – Chicago Sun-Times

The book also contains an excerpt from "Solomon vs. Lord," the first novel of the bestselling series of legal thrillers. A quick synopsis: Victoria Lord follows all the rules. Steve Solomon makes up his own. When they defend an accused murderer, they'll either end up in ruin, in jail...or in bed. Here's what number one bestselling author Harlan Coben had to say: "Hiaasen meets Grisham in the court of last retort. A sexy, wacky, wonderful thriller with humor and heart."

Finally, an excerpt of “Mortal Sin,” one of the award-winning Jake Lassiter novels, is included. This time, the linebacker-turned-lawyer has a dangerous conflict of interest. He’s sleeping with Nicky Florio’s wife...and defending the mob-connected millionaire in court. Florio has hatched a scheme deep in the Florida Everglades that oozes corruption, blood, and money. One false move, and Jake will be gator bait. “Recalling the work of Carl Hiaasen, this thriller races to a smashing climax.” – Library Journal.

PRAISE FOR THE FICTION OF PAUL LEVINE

"Just the remedy for those who can't get enough Spenser and miss Travis McGee terribly." – St. Petersburg Times

Paul Levine achieved widespread acclaim with his first novel, the international bestseller "To Speak for the Dead," in 1990. That book introduced linebacker-turned-lawyer Jake Lassiter and is now available as an e-book.

Levine is also the author of "Night Vision," "False Dawn," "Mortal Sin, "Riptide," "Fool Me Twice," "Flesh & Bones," "Lassiter," and "Last Chance Lassiter." Those books, all Jake Lassiter novels, are also currently being released as e-books, as is "Impact," a thriller set at the Supreme Court. That novel inspired the CBS drama, "First Monday," starring James Garner and Joe Mantegna, and was co-created and co-executive produced by Levine.

He won the John D. MacDonald fiction award and was nominated for the Edgar, Macavity, International Thriller, and James Thurber prizes. A former trial lawyer, he also wrote more than 20 episodes of the CBS military drama “JAG.”

He is also the author of the “Solomon vs. Lord” series and the thrillers “Illegal” "Ballistic," and "Paydirt." His most recent novels are "Bum Rap," an Amazon number one bestseller, and "Bum Luck."

You have subscribed to alerts for Paul Levine.

You have been added to Paul Levine's favorite list.

You can also sign-up to receive email notifications whenever Paul Levine releases a new book.