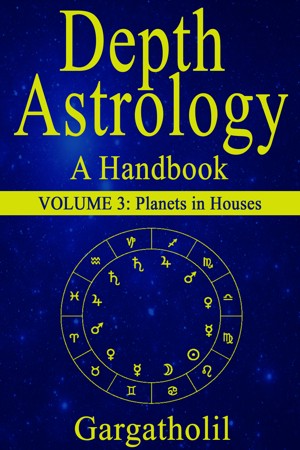 Depth Astrology - Planets in Houses is a valuable tool for the novice just entering the field of depth astrology, for the astrological professional desiring a look-up of planetary interpretations that provide guidance to the unfolding potentialities of planetary placements, or for anyone seeking to use the astrological symbol-set as a tool for self-discovery and growth.

Gargatholil's interest in astrology began more than 40 years ago with his discovery of the works of Dane Rudhyar and Alan Leo. Their love of music goes back farther. One of the first albums Gargatholil bought was Freewheelin' Bob Dylan.
In the 1980s, Gargatholil;s knowledge of astrology was further informed by the writing of Donna Cunningham, Stephen Arroyo and Liz Greene. Gargatholil has always appreciated astrology as a tool for self-knowledge and personal growth. He believes, while transits may be valuable for understanding the "astrol weather" one is experiencing, it is the natal chart that holds the key to interpreting the drives and motivations, qualities, internal conflicts and challenges, and potential of the personality resident in this lifetime. Gargatholil has long rejected using astrology to attempt to predict the future on both practical and spiritual grounds.

Gargatholil has a Libra Sun and Taurus Ascendant (both ruled by Venus), with Moon in Capricorn in the tenth house (both ruled by Saturn) cusp Aquarius (ruled by Uranus). The primary rulers of Gargatholil's chart, Venus and Saturn, are conjunct in Virgo, while the Moon forms the point of a Yod to Saturn and Uranus. Understandably, Gargatholil has a straight gig and does not wish his identity to be revealed. He also is grateful to have been blessed with the capacity to bring the content of the Higher Mind to a more concrete and structured level.

Gargatholil has eclectic taste in music. His criteria for considering something worthwhile listening to boils down to "as long as she's been doin' it right." Gargatholil lived the Sixties Countercultural experience and the music of that era occupies a special place in their heart.

Reviews of Depth Astrology: An Astrological Handbook - Volume 3: Planets in Houses by Gargatholil

You have subscribed to Smashwords Alerts new release notifications for Gargatholil.

You can also sign-up to receive email notifications whenever Gargatholil releases a new book.