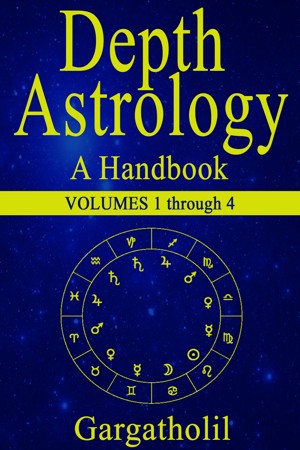 By Gargatholil
Rated 5.00/5 based on 6 reviews
The complete set of Gargatholil's 4-volume work, Depth Astrology: An Astrological Handbook--reviewed in The Mountain Astrologer Dec/Jan 2018. Interprets the astrological symbol set using a psycho-transformative approach. For the novice or professional, this work is an introduction to depth astrology and explores the meanings of planets in signs, houses and aspect. Sample individual volumes. More
This is the complete set of Gargatholil's 4-volume work, Depth Astrology: An Astrological Handbook--the first comprehensive handbook interpreting the astrological symbol set in the tradition of such pioneers as Dane Rudhyar, Liz Greene and Stephen Arroyo. In the Introduction, Gargatholil explains the theory and philosophy behind his approach to depth astrology. The Introduction also is a basic astrological primer, providing essential meanings from a depth astrology viewpoint for the astrological symbol set--planets, signs, houses, aspects, elements and modalities. In Planets in Signs, planetary placements in each of the 12 zodiacal signs are interpreted using the psycho-transformative depth astrology approach. In Planets in Houses, planetary placements in each of the 12 astrological houses are interpreted. In Planets in Aspect, each of the six major astrological aspects--conjunction, sextile, square, trine, opposition and, for most planetary combinations, the quincunx) are interpreted for each binary planetary aspect occurring in the twentieth century and in the twenty-first century through 2013. "Planets" include the 10 traditional astrological planets, the Ascendant and Midheaven, the Moon's Nodes and the Part of Fortune, except that the Ascendant and Midheaven are not contained in Planets in Houses. Each interpretation contains: an explanation of the essential meaning and potential manifestations of the planet in its placement, based on the interaction between the planetary and other zodiacal symbols; the transcendent potential of the planetary placement; and manifestations of the planetary placement from a place of insecurity. Planets in Signs also includes common meanings of the planetary placement on a positive-to-negative continuum and the "influence" of the planet when aspecting or aspected by another planet. Planets in Houses includes an interpretation of the focus of the psychological function symbolized by each planet. The handbook is searchable using the Table of Contents, with links back to the Table of Contents for ease of multiple look-ups.

Depth Astrology: An Astrological Handbook is a valuable tool for the novice just entering the field of depth astrology, for the professional astrologer desiring a look-up of planetary interpretations that provide guidance to the unfolding potentialities of planetary placements, or for anyone seeking to use the astrological symbol-set as a tool for self-discovery and growth.

To sample Planets in Signs, Planets in Houses, or Planets in Aspect, please go to those individual volumes.

Gargatholil's interest in astrology began more than 40 years ago with his discovery of the works of Dane Rudhyar and Alan Leo. In the 1980s, Gargatholil;s knowledge of astrology was further informed by the writing of Donna Cunningham, Stephen Arroyo and Liz Greene. Gargatholil has always appreciated astrology as a tool for self-knowledge and personal growth. He believes, while transits may be valuable for understanding the "astrol weather" one is experiencing, it is the natal chart that holds the key to interpreting the drives and motivations, qualities, internal conflicts and challenges, and potential of the personality resident in this lifetime. Gargatholil has long rejected using astrology to attempt to predict the future on both practical and spiritual grounds.

Gargatholil has a Libra Sun and Taurus Ascendant (both ruled by Venus), with Moon in Capricorn in the tenth house (both ruled by Saturn) cusp Aquarius (ruled by Uranus). The primary rulers of Gargatholil's chart, Venus and Saturn, are conjunct in Virgo, while the Moon forms the point of a Yod to Saturn and Uranus. Understandably, Gargatholil has a straight gig and does not wish his identity to be revealed. He also is grateful to have been blessed with the capacity to bring the content of the Higher Mind to a more concrete and structured level.

Gargatholil has eclectic taste in music. His criteria for considering something worthwhile listening to boils down to "as long as she's been doin' it right."

Excellent astrology book. Better than any other resource. I always come back to this book. Thank you.

(reviewed 4 years after purchase)
fairyv reviewed on April 8, 2015
(no rating)
The *best astrology resource I've come across. I would love to hear your input of house systems, and vedic vs. western... So precise. Thank you.

Just bought this tonight while researching Jupiter in Aries. i don't need to read anymore to say I will be constantly referring to this book. Thank You to the author. I appreciate all your hard work. So, of course, *****

If the government knew these interpretations exits, Gargatholil will be arrested for revealing knowledge so deep to the masses.

(reviewed 4 months after purchase)
D. Singleton reviewed on June 12, 2014
(no rating)
This book is blowing my mind.

(reviewed the day of purchase)
Ramjem Az reviewed on May 31, 2014
(no rating)
Thank you for this awesome book! This is what i need most-the complete book about astrology! Thanks a lot again.

Gargatholil - You are a most valuable enigma. Thank you for this opus of astrology. Amazing work.

(reviewed the day of purchase)
Dutzito reviewed on April 28, 2014

This book is just exellent! I've been into astrology for a few years now and I have never seen a more intelligible explanation of the matter, so alive and autentic. Admirations for the autor! Thank you so much for your work!

You have subscribed to alerts for Gargatholil.

You can also sign-up to receive email notifications whenever Gargatholil releases a new book.