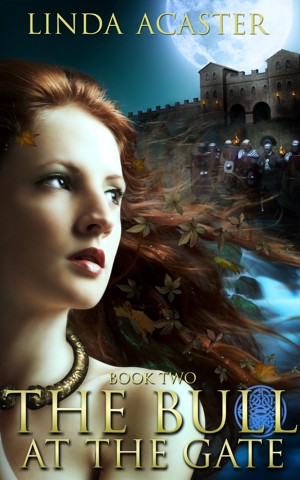 The Bull At The Gate: Book 2

By Linda Acaster
Rated 5.00/5 based on 1 review
Book 2: 'Torc of Moonlight' trilogy. Nick has moved to York, a mediaeval city where Viking re-enactments thrill the tourists. When a colleague vanishes the police start asking awkward questions about Alice. But York was once a Roman colonia that garrisoned the Ninth Legion and the Sixth Victrix, and the stains of older, sacrificial, deaths lay buried deep in modern cellars, desperate for escape. More
The Bull At The Gate – Book 2 in the 'Torc of Moonlight' trilogy of paranormal romantic thrillers set in northern England.

"…a crafted blend of Crime, Thriller and Myth makes the reader question their grasp of reality…"

Nick has moved to York, a walled mediaeval city of crooked half-timbered houses and tight cobbled streets where historical re-enactment groups of Viking longshipmen thrill the tourists. Yet deep in the crypt of York Minster sit the foundations of an earlier occupation, the Roman fortress of Eboracum that garrisoned both the infamous Ninth Legion and the Sixth Victrix. When one of Nick’s colleagues is reported missing and the police begin to ask awkward questions about Alice, an artefact from the Temple of Mithras appears on his desk. A clever reproduction, or a 1700 year old relic looking as new as if it had been made yesterday?

See LINKS to books below. Linda Acaster is an award-winning writer living in Yorkshire, England (UK), and the author of seven novels, a fiction-writer's resource, and over 100 articles & short stories ranging from Horror to Crime to Literary.

Also in Series: Torc of Moonlight

Reviews of The Bull At The Gate: Book 2 by Linda Acaster

'Bull at the Gate' is the second novel in a trilogy - and what a trilogy! This is a dark thriller of a story with many themes and a blending of ancient and modern beliefs. Nick, the hero, is an engaging character, surrounded by immense problems and struggling to understand dark forces. All the way through, Linda Acaster cleverly weaves it so the reader is not sure of Nick, an unsettled, beleaguered young man of only twenty-two, trying to make his way in a modern setting that ignores all non-material aspects of the world. He is grieving and yearning for the loss of his lover Alice, but is Alice truly dead? If she is, who or what killed her? What part did Nick play in that tragedy? When another young woman Sophie vanishes, what part has Nick played there?

Nick feels responsible but is he? Is he deluded? Is he psychic? Are the horrifying visions the sensual visions that he experiences from within himself or from lethal, ancient forces outside? The author cleverly shows how 'modern' man reacts to these strange events by revealing how the police view Sophie's disappearance and Nick's odd history. Who is to say they are mistaken? That is the beguiling tightrope walk we are sent on throughout 'Bull at the Gate'. The final third of the novel, with Nick desperately seeking to find Sophie and Alice, is a exciting historical chase, full of twists and turns, fascinating clues and high stakes. Linda Acaster makes the reader care for her characters: they are not pawns being shifted about in a heartless chess game of 'find the historical fact'. This is superior story-telling of the highest order.

The novel has a long reach, with flashbacks to Roman times and a parallel storyline that reveals the beliefs of that period. Is there a time portal that opens? What is the deadly shape-shifter that lurks in water? These questions are left hanging for the third novel but so much is going on it does not matter. The author uses the setting and landscape of York superbly, making the city itself a mystery and a character. I walked the streets with Nick, learning with him the layers of the ancient Roman and Celtic settlements hidden just beneath those of the Medieval and Viking. The river, too is a character, both a source of life and a threat.

Trilogies and series novels always need to avoid the danger of leaving the reader feeling unsatisfied before the final novel that draws all the series threads together. 'Bull at the Gate' avoids this by having a second, strong storyline concerning the missing young woman Sophie. This story is cleverly enmeshed in the larger themes of the trilogy and the reader cares about her, especially in relation to the hero of the series, Nick. Nick is a great character, the glue that holds the series together. He thinks he is not brave but he keeps going, keeps struggling, keeps feeling, often in the teeth of overwhelming odds. By the end of 'Bull at the Gate', the reader has been in a hectic adventure, has had some resolution and can put the book aside feeling satisfied, while at the same time looking forward to the final part of the trilogy.

You have subscribed to alerts for Linda Acaster.

You have been added to Linda Acaster's favorite list.

You can also sign-up to receive email notifications whenever Linda Acaster releases a new book.