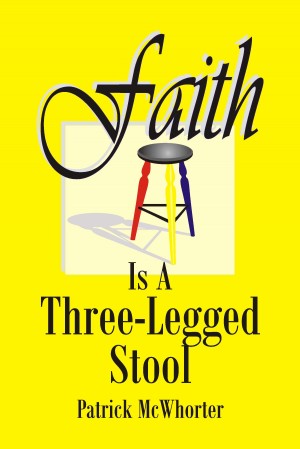 Faith is a Three-Legged Stool

Born in a small town in Georgia, Patrick McWhorter, along with his mother and four siblings, lived in his grandparents’ shotgun house in a mill village. Eleven people occupied the two-bedroom house rented from the textile mill where his grandmother worked. After his father abandoned the family, Patrick’s grandfather, a musician and songwriter who painted houses to care for his family, became the inspiration for McWhorter&#39;s creative bent. When his mother remarried, the brood moved to a residence built underneath the screen of a drive-in theater. After high school, his college aspirations were postponed due to military service that included a year in Vietnam. Afterward, he returned to Georgia, earned a degree in Journalism, and began a career in advertising that would span more than 35 years. He has been married for 32 years to his lovely wife, Laurie. Retired from an advertising agency, the author has published several Christian teaching books and four Christian novels. He spends his spare time in hobbies such as backpacking and journaling. As head of Grace Warrior Ministries, he teaches Christian discipleship classes. McWhorter sometimes publishes under the pen name, P. V. Mack.

Review
JR Hood, Sr reviewed on Sep. 4, 2014
(no rating)
"Faith is a Three-Legged Stool" by P.V. Mack is an insightful and inspiring book on Faith...which is the very essence of our relationship with Christ.

You have subscribed to alerts for Patrick McWhorter.

You have been added to Patrick McWhorter's favorite list.

You can also sign-up to receive email notifications whenever Patrick McWhorter releases a new book.